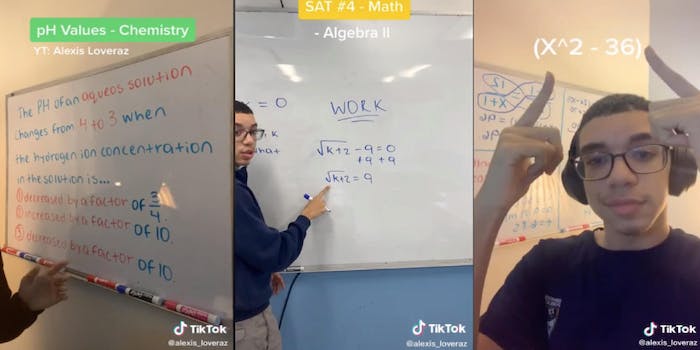 Teen goes viral on TikTok for being an ingenious math tutor

Students say he's easier to understand than their teachers.

Sixteen-year-old Alexis Loveraz has gained a massive following on TikTok for virtual tutoring his peers in algebra, geometry, and chemistry.

The Bronx teen started making math, science, and SAT prep videos a few weeks before schools shut down. But now that students all over the country are learning from home and turning to online resources, he’s launched to success with about 331,000 followers and more than 3.4 million likes.

The high school junior, with a 4.0 average, has been dubbed the “TikTok Tutor,” according to CBS New York.

“I was, like, really shocked,” Alexis told CBS New York. “Things that they probably forgot like before COVID-19, this is like a refresher of what I’m, like, giving them out. It’s really cool because they understand it even better the way I’m explaining it to them.”

Many of the comments on his videos are students saying they’ve learned more from the TikTok videos than from their actual teachers and tutors.

“Sir I have learned more from you in these videos than in my three years of Saturday SAT Prep,” TikTok user @karinagonzalez1874 commented.

Loveraz told CBS New York that his friends encouraged him to post tips and tutorials on the app. He also created Google Classrooms where more than 2,000 students, from the United States, Canada, Australia, the Philippines, and Singapore, gather to study together.

“I think people have to depend on YouTube videos and TikToks to learn even more,” Loveraz told Business Insider.

Loveraz’s mother, Likmilian Hiciano, is surprised by how many people are following her son’s videos.

“I’m excited about this. I know he can do this and more. I’m so proud that he helped a lot of people,” Hiciano told CBS.