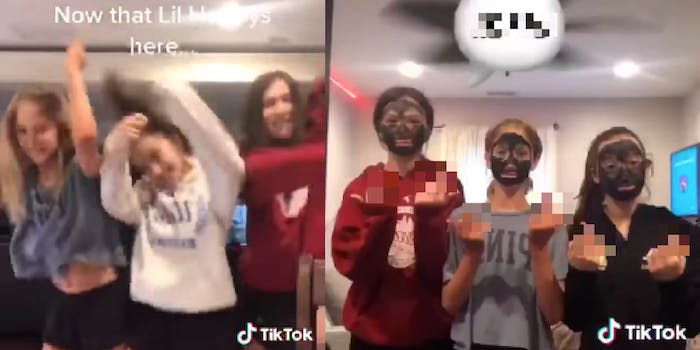 When they finished putting on the blackface, they stuck their middle fingers up at the camera, and the 'N-word' flashed across the top of the screen.

A group of Woodridge, Chicago students are being investigated after a racist video showing several minors wearing blackface was posted to TikTok.

The footage, captioned “How to steal somebody’s girl,” was uploaded by user @maggiejoyce21215 and showed three young girls dancing and applying blackface makeup. When they finished putting on the blackface, they stuck their middle fingers up at the camera, and the “N-word” flashed across the top of the screen. The video has since been removed from the TikTok account it was posted to.

On April 22, the local police department caught wind of the video, but by then, several parents and students from Woodridge School District 68 had already viewed it. Both the district and the police initiated investigations into the incident.

In response to the public debacle, the district also released a statement condemning the students’ actions.

“As a District, we are extremely disappointed that this occurred, and we strongly condemn it,” the message posted to Facebook read. “When this type of conduct occurs, as a District we have failed, despite our best efforts in teaching tolerance, equity and understanding in our schools.”

The district assured everyone that disciplinary action would be taken and praised those who called attention to the footage.

Even the the city’s politicians took the time to address the incident.

“This video hurt many of our neighbors, and it happened when we all need to help and support each other,” Woodridge Mayor Gina Cunningham said in a statement. “I’m hopeful that those involved will learn from this matter and understand Woodridge’s unwavering commitment to being an inclusive community.”

The Daily Dot reached out to @maggiejoyce21215 but did not receive a response by publication time.