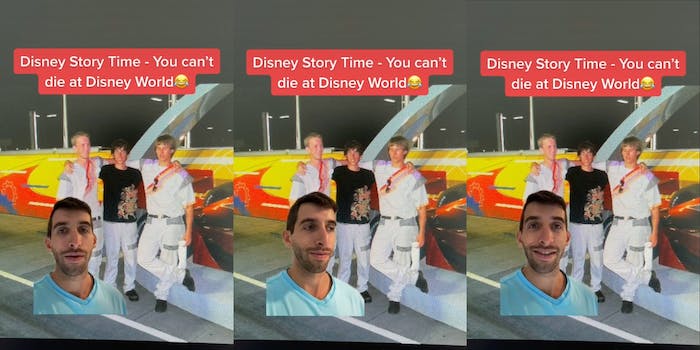 'Disney really said ‘do it somewhere else.’'

It’s commonly acknowledged in the Disney fandom that no one can die at Disney World, but according to one viral TikTok, there might be more to the story.

Tom Cruz, or @tcruznc on TikTok, said in a viral video that no one has ever or will ever die inside of any Disney park, because as the fandom knows, “it’s the happiest place on earth.”

“And you can’t have your guests dying there,” he said in the video.

Cruz, who has over 745,000 followers, claims he was a Disney intern at Magic Kingdom in Orlando during one of his summers in college. One “super hot” day, he was helping a family with an older gentleman into a go-cart ride.

Due presumably to the extreme heat, the man collapsed on his face, busting it badly, according to Cruz.

A doctor from the go-cart line tried to revive the man through CPR, but Cruz said he wasn’t breathing the entire time. Meanwhile, it took 15 minutes for emergency services to make it through the park to help.

Emergency services stretchered the man out of the park, resuscitating him the entire time, Cruz said. During the incident, he wondered why they were still trying to revive the man when he was clearly dead.

The answer, he claimed: no one dies at Disney World.

Cruz said a manager on duty told him that anyone close to dying or potentially dying is resuscitated until they are off Disney property, at which point they can be formally declared dead.

The TikTok has received over 518,000 views, and viewers are calling the story wild.

Another said, “Disney really said ‘do it somewhere else.’”

Several viewers weren’t buying it, pointing out the various reported deaths at Disney parks over the years. As one explained, “Untrue, they’ve just never been ‘pronounced’ dead.”

Multiple users recalled when a 2-year-old Nebraska boy was killed by an alligator at a Walt Disney World Hotel in 2016.

And in 2003, a 22-year-old man was reported dead and ten others were injured when Disney’s Big Thunder Mountain Railroad roller coaster derailed.

Viewers pointed out multiple other incidents of people dying at Disney, but Cruz insisted in the replies that they weren’t “official” deaths.

The fact-checking website Snopes investigated this urban legend in 1996, noting that the assertion hinges on the gap between a person’s physical death and the time a doctor officially declares them dead. Some jurisdictions require first responders who begin life-saving efforts on unresponsive guests to continue doing so until they arrive at a hospital, at which point a declaration can be made. However, there are multiple reports of deaths declared “at the scene” on Disney property, according to the Snopes report.

Representatives for Disney and Cruz did not immediately respond to the Daily Dot’s request for comment.