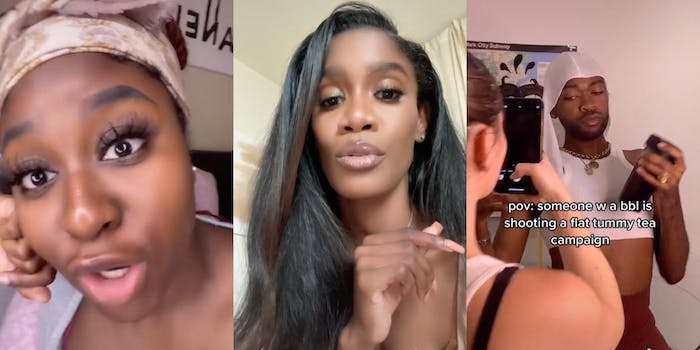 ‘Why are 18, 19-year-olds out here getting BBLs?’: TikTokers discuss the realities of Brazilian butt lifts following popular trend

'Your body hasn't even finished growing'

Amid the rise of the “BBL effect” meme, some TikTokers are discussing the realities of Brazilian butt lifts and questioning why so many young people are getting the procedure.

TikTok user Melissa, known as @melanated_mel, said in a viral TikTok that BBLs are “not for everybody.” The video has over 430,000 views.

A Brazilian butt lift, or BBL, is a fat transfer operation that takes fat from one part of the body and injects it into the buttocks for an enhanced and more voluminous backside. It’s not cheap.

“Why are 18, 19 year olds out here getting BBLs, breaking the bank? Your body hasn’t even finished growing,” Melissa questioned, adding in the on-screen caption, “Getting BBLs was normalized to the wrong generation… a lot of Gen Z does not have common sense.”

She clarified that she’s “pro-surgery” if it makes people happy but thinks people should wait until they have the money for a safe procedure. She also pointed out that people can die from BBL surgeries.

Roxanne Ramsey, @roxanneramsey on TikTok, stitched Melissa’s video, saying it was “so true.”

As someone who recently went with her friend to their BBL appointment in Miami, Florida, she said she was shocked to see so many young women in the waiting room.

She said they were wheeling around girls in wheelchairs who had just undergone their surgeries and putting them right into their vehicles. The facility, which was not identified, allegedly didn’t have enough pain medication to go around because there were so many patients.

“It was like a trap house for BBLs,” she said.

She clarified in the comments that she is supportive of people who want to get BBLs “regardless of age.” She further expressed that she wanted young women to be safe and do their research beforehand because some people were “booking doctors based off of popular [Instagram] pages.”

Another TikToker, @faithashtynlawler, gave a breakdown of her personal BBL expenses, which including hotel and travel totaled $6,784.84. While some commenters thought her bill was cheaper than expected, several others felt it was too costly considering the risks.

“Not bad I’m just scared of not waking up and recovery,” one person said.

However, she did clarify that prices can vary, and that’s just what she paid—also in Miami.

BBL procedures have been on the rise in recent years. Journalist Sophie Elmhirst explained in The Guardian earlier this year that it is becoming an increasingly popular surgery—especially with the rise of pop cultural icons like the Kardashians—and increasingly dangerous. Elmhirst cited a study that said one in 3,000 BBLs result in death. In Miami, a popular destination for this surgery, NBC Miami reported last year that 15 people have died in recent years as a result of the procedure.

The videos discussing the financial and physical costs of BBLs come as the “the BBL effect” has turned into one of TikTok’s hottest memes. Started by @antonibumba, the meme pokes fun at people who change their attitudes after getting the surgery. In a nutshell, the BBL effect occurs after your BBL procedure, when you somehow become better than everyone else.