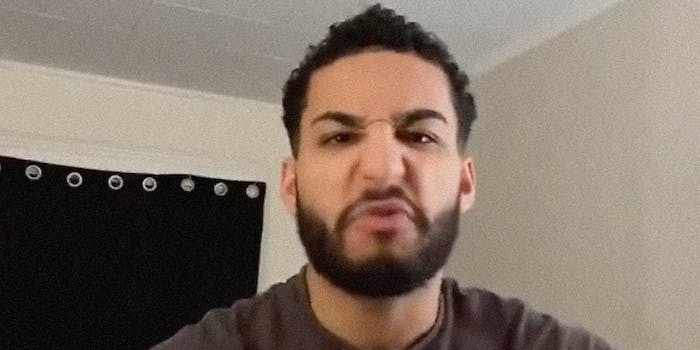 ‘Still don’t have a curtain rod’: Guy gets roasted for misogynistic TikToks

The comment section had quite a time with his TikToks.

There are plenty of sketchy men on TikTok attempting to offer advice about dating and women, but one, in particular, was elevated this week, full of red flags.

The TikTok account heartbreaknino617 only has a handful of videos up, but they’re all similar in scope: Here’s what women are doing wrong, here’s why feminism is bad, and here’s why you need to submit to a man.

It’s pretty clear what this guy’s game is: Target what you think are women’s insecurities (while actually just projecting your own), and talk about them like they’re objects. Many of his TikToks include the “red pill” hashtag, a term associated with men’s rights forums.

Earlier this week, the Twitter account princessjahadd posted one of his TikToks with the caption “… this scary asf.” The video got more than 4 million views and 30,000 quote tweets.

His advice was quickly picked apart, as were his grammar and spelling skills.

Others pointed out the cognitive dissonance of his advice, and that he appears to have nailed his curtain directly into the wall behind him. (Some claimed that it’s a shower curtain being used as curtains.)

Over on TikTok, the comment section was similarly cutthroat, especially the comments on a video in which he misspelled “equality.”

“You can’t even change the battery in your smoke alarm,” said one commenter.

Elsewhere, TikToker Courtney Craven graciously offered him a tutorial on how to install a curtain rod, and change the battery in his smoke alarm. The audition vibes of his “equility” video were also parodied.

While he’s getting rightly roasted for his content, someone also posted an alleged Facebook exchange with him to Twitter, in which he appears to admit to dating a 17-year-old at 23 years old because it’s a “legal age.” The poster told the Daily Dot that the exchange was from a couple of months ago. We’ve reached out to heartbreaknino617 on TikTok for a comment.