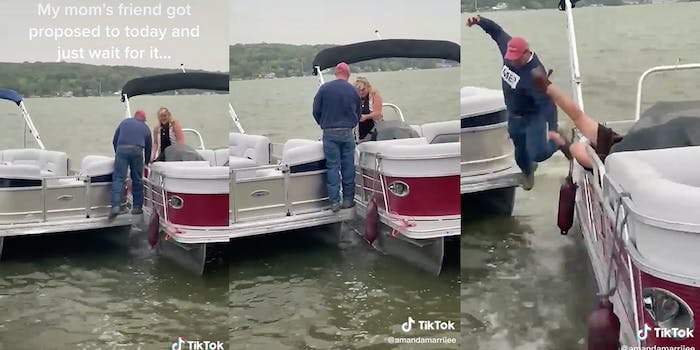 Apparently, when guys aren’t pushing their girlfriends into a pit of sharks, they’re being dunked into the water themselves. A video recently shared to TikTok shows a “fairy tale” marriage proposal gone wrong when a man on a boat is accidentally drop-kicked and sent into the water by his girlfriend.

Within a day of being posted, the video has now been viewed over 2.3 million times on the platform.

“My mom’s friend got proposed to today,” wrote the original poster in edited text over the video. “And, just wait for it…”

The video then shows a man and a woman on two separate boats as the man inches toward the woman on the opposite edge, pulling out a ring box from his back pocket.

“It’s like a fairy tale,” a bystander can be heard saying.

From there, things quickly turn awry when the woman, crying with tears of excitement, leans in for a kiss just as the boat’s motor is seemingly triggered causing it to take off with high speed. She flips backward, kicking her guy in the face as he’s plunged into the water by a foot to the face and the boat’s momentum.

According to a later follow-up comment by the original poster, the soon-to-be couple was able to salvage the ring following the accident. Additionally, both parties are “okay,” with no reported injuries sustained at this point.

While the marriage proposal gone wrong may have quickly escalated into a fail in the viral moment caught on tape, the woman did, in fact, say “yes.”