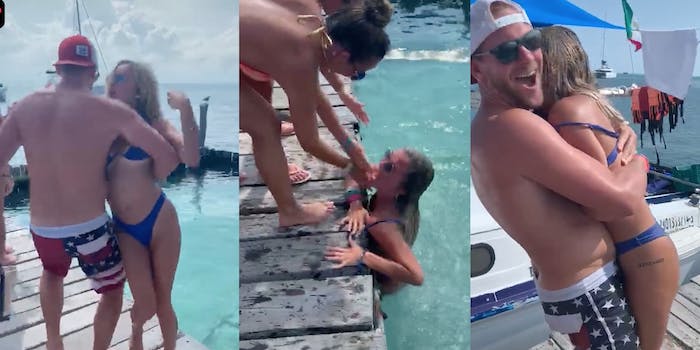 People are urging the girl, who is terrified of sharks, to break up with him.

“Boys will be boys” has long normalized playground cruelty—and worse—against girls, but it’s still baffling to see grown men thinking that terrorizing women for a laugh is actually funny rather than being indicative of problematic behaviors that need to be checked.

But a TikTok user by the name of John Schoepf clearly failed to get the message that being mean to your girlfriend isn’t cute or hilarious, even after viewers put him on blast for throwing his girlfriend into a “shark tank” and posting the video online.

From the looks of it, Schoepf and his girlfriend were on vacation with some of their friends in Mexico when they walked by a section of the water that was enclosed. In the video, he pushes her in and yells “there’s sharks,” a claim he repeats in the video’s caption, although no sharks appear on the actual recording.

Still, the girlfriend is clearly terrified and panicking as she gets helped back out of the water by two other women, only to be “comforted” by the guy who pushed her in to begin with.

The video did not go over well with viewers, who were appalled on so many levels. First, even just pushing your girlfriend into the water is a total jerk move after you pass the age of like 5 and know better. But Schoepf also noted his “gf is terrified of sharks” in the TikTok caption, and to not only use her fears against her but to then upload her reaction to social media as a joke is doubly awful.

Every video on Schoepf’s TikTok is getting swarmed with demands for the girlfriend to break up with him, pointing out all the ways this behavior is a complete red flag.

“That’s not funny it’s humiliating,” @null_pk wrote. “So embarrassing to be crying in front of a crowd of people while being recorded. This was cruel not funny.”

“Pushing her in and then comforting her after is the most manipulative thing I’ve ever seen,” @thesavberrios pointed out.

Another user drew attention to Schoepf’s bio on TikTok, which reads “I don’t chase them, I replace them,” as “the first red flag.”

As Schoepf didn’t realize he messed up in between pushing the girlfriend into the water and uploading it for likes on TikTok, it’s not surprising he also doubled down after being called out for doing something basically everyone was calling reprehensible.

“I know everybody hates me, but… it was literally a sucker shark, and people were in the water petting it,” he says in a follow-up video that also features his girlfriend, completely missing the point. “And she was really f*cking drunk.”

She chimes in to insist that “it really wasn’t a big deal” and “we’re very happy,” even as footage of Schoepf opting to traumatize her plays alongside them.

“These ppl are ridiculous,” Schoepf replied to a comment supporting him.

“It’s the trying to justify abusive behaviors for me,” one user fired back.