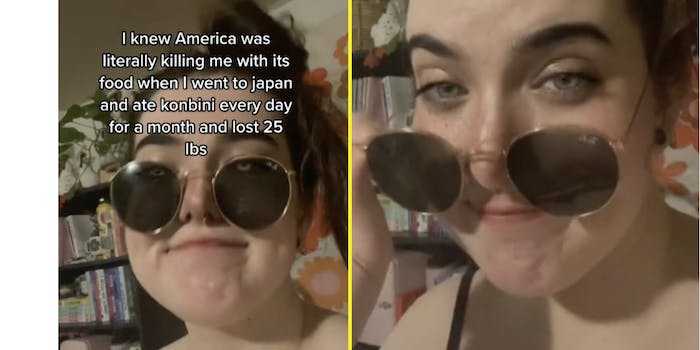 'We're being poisoned,' one commenter bemoaned.

A TikToker who compared American and Japanese food in a wildly viral video touched off an online debate about eating habits in the two nations.

The TikTok, courtesy of Samantha “Sunnie” Cherie, who operates the @trashbuns account, has attracted more than 1.6 million videos since being posted to the platform on Friday.

The video was captioned, “Literally are [sic] JUNK for at least 2 meals a day In japan and lost POUNDS,” and the on-screen text played during the short video says even more.

In the short video, the TikToker nods while wearing sunglasses to Bfb Da Packman’s “Ocean Prime,” a song built around the line, “She want Ocean Prime, but she gettin’ Chick-Fil-A.” The on-screen caption reads, “I knew America was literally killing me with its food when I went to Japan and ate konbini every day for a month and lost 25 pounds.”

According to ByFood, konbini are Japanese convenience stores, open 24 hours a day, that serve a variety of foods. As the article explains, konbini “are one-stop shops that grace every corner of every Japanese street, shining like a beacon of hope in the dead of night and wee hours of the morning when everything else is closed.”

The most common konbini grab-and-go options including onigiri (seaweed-wrapped rice triangles that have a meat, fish, vegetable, or combo filling inside), bento (a snack box that typically includes “rice, grilled fish, pickled veggies, tamagoyaki, and sometimes chicken karaage or a meatball”), and sandwiches.

Commenters had plenty of opinions on her findings. One opined, “It’s probably because you’re not making the right choices back home, hun,” before advocating against eating any animal products. However, Cherie clapped back, saying they have been vegan for eight years.

Another faulted the American food industry, seeming to side with Cherie, alleging, “A lot of our food isn’t even allowed in other countries because it violates their safety regulations.” The commenter then elaborated, “We’re being poisoned.”

Another argued that it’s not diet but exercise making the difference. “People always think this,” the commenter said of the TikToker’s assertions, “but really it’s because you walk more on vacation and Japan’s food has less calories.”

However, someone else insisted that the food was the difference maker, noting, “I found this out when I did a clean eating diet. I’ve mentally and physically never felt that good before.” The commenter then added, “Stay away from fast/processed food.”