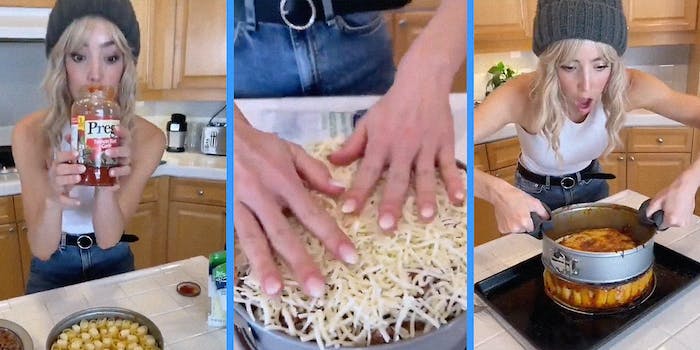 It's not great, but there's been much worse posted to TikTok.

Food hacks and tutorials are big on TikTok, and have become even more popular over the last year, as we’ve been stuck at home staring into the fridge.

TikToker Anna Rothfuss recently tested out a recipe for something called “honeycomb pasta.” The video, which has more than 11 million views, shows Rothfuss inserting thick pieces of string cheese into what appears to be cooked pasta, then topping it with tomato sauce, ground beef, and more cheese before baking.

The TikTok was posted to Twitter on Friday, with the caption “Absolutely cursed.” Some people agreed, but the more popular sentiment seemed to be that it looked good, actually. Or at least edible.

Rothfuss’ other videos include a “hack” to save money by washing your hair in the toilet and a tutorial on turning pieces of bread into slippers, so it’s not entirely clear if she’s engaging in satire here. But, as echoed by commenters, this isn’t the worst dish someone’s posted to TikTok.

With its duet feature, TikTok has created a whole new genre of people reacting to (what appears to be) the earnest preparation of unattractive food—including professional chef Gordon Ramsay. Making unappetizing food on TikTok gets clicks, which might be the only way to explain why someone would make Nerds casserole. Those clicks also translate to TikTok’s For You page, so there’s more of a chance you’ll catch a glimpse of someone’s “process,” but not everything posted is chaotic or “cursed.”