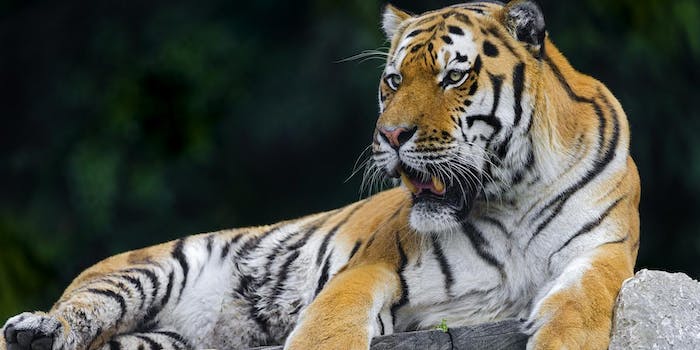 5 ideas for the next time Detroit cops encounter a tiger

Tigers are serious business. We have advice.

Pro tip: If you ever encounter a tiger, a weed whacker will do nothing to save you.

Detroit police were called to the city’s abandoned Packard Plant on Monday when they received reports of a tiger exploring the premises. To their chagrin, there was, in fact, a tiger in the abandoned plant.

British photographer David Yarrow had brought the animal to the plant for a photoshoot, but he apparently hadn’t cleared it with the city. He had also failed to notify authorities of the bobcat and the wolf that participated in the shoot. Suffice it to say, the police shut him down. But before anyone could contain it, the tiger broke loose and started checking out the digs.

Stuck on the fourth floor, the group tried to scare the tiger into heading back down to the ground floor, bringing in a friend with a loud weed whacker. After multiple attempts, the effort failed, as the tiger simply swatted at the weed whacker.

The Daily Dot reached out to the Detroit Zoo, a New York City animal society, and the handlers of the tiger in question, seeking comment on tiger-herding tactics. We received no response.

This got us thinking about alternative, more effective, and perhaps safer ways to deal with a tiger when you inevitably run into one.

1. Drop an obscure Calvin & Hobbes reference that only real fans would know

2. Invite him down for a game of sports

For example, “Do you think the Tigers have a shot at the pennant?”

4. Raise your Power Sword to the sky and proclaim “I HAVE THE POWER,” magically transforming the tiger into a brave, loyal steed-like warrior

5. Make sure your affairs are in order, and run