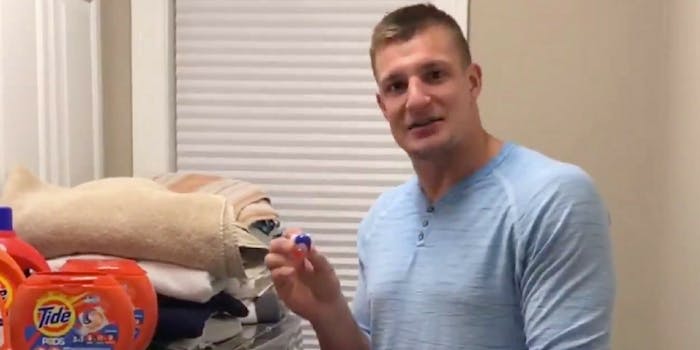 Even if people aren’t really eating Tide Pods on purpose, Tide knows that some day, this meme-turned-DIY-recipe of a laundry pod could become somewhat of a PR nightmare should a bunch of tweens decide that, hey, they really want to show how cool they are by seeing who can eat the most Tide Pods.

So, they’ve come up with a detergent deterrent to get ahead of the narrative, and show that, hey, they’ve done all they can to warn people that you shouldn’t eat Tide Pods, no matter how funny the premise of digging in on a bag of laundry detergent seems to be.

“What should Tide PODs be used for? DOING LAUNDRY. Nothing else,” the brand’s Twitter account tweeted on Friday. “Eating a Tide POD is a BAD IDEA, and we asked our friend @robgronkowski to help explain.”

What should Tide PODs be used for? DOING LAUNDRY. Nothing else.

Eating a Tide POD is a BAD IDEA, and we asked our friend @robgronkowski to help explain. pic.twitter.com/0JnFdhnsWZ

“What the heck is going on people?” Gronkowski asks, echoing the confusion that many of us have harbored for the better part of January. “Use Tide Pods for washing, not eating.”

“Do not eat,” he says as he looks at the Tide Pod, and then the camera, as if he too is truly having to resist popping the pod right into his mouth and chomping down with reckless abandon.

Tide’s cautionary post may actually be necessary—the Consumer Product Safety Commission (CPSC) is warning families about the dangers of consuming Tide Pods after the “Tide Pod Challenge” has encouraged teenagers to put the pods in their mouths while taking a video, according to CBS News. Children and elderly people, however, are often more at risk of accidentally mistaking laundry pods as food or a toy. For this, Ann Marie Buerkle, acting chairman of the CPSC says the organization is working with manufacturers to make laundry pods less colorful and less toxic.

On the footballer’s own Twitter account, he shared Tide’s video and reminded readers, once again, that Tide Pods are for doing laundry, and “nothing else!”

I’ve partnered with @Tide to make sure you know, Tide PODs are for doing laundry. Nothing else! https://t.co/Oo7n7ZZpbG

Alright folks, you’ve had three warnings. Now don’t come crying to Tide the next time your Pod popping gets out of hand.