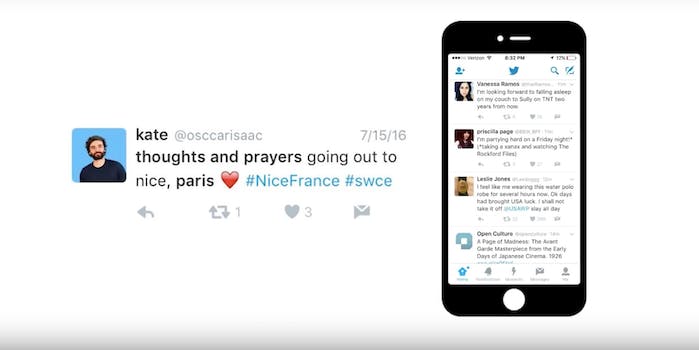 'Wow, I can't wait for the next school shooting.'

Looking to come off as a good person after another mass shooting or natural disaster? Then the ‘Thoughts & Prayers’ app is perfect for your apathetic ass.

After a tragedy, this spectacular technology will post some good ol’ thoughts and prayers via your social media account. This means you won’t have to interrupt your Netflix marathon to update your Facebook status and you can still come off as a person who actually gives a fuck.

Several people stabbed in New York City? Don’t fret, let the Thoughts & Prayers app take care of everything. There’s even a premium version if you want your hollow tweet of “hoping everything in the world is OK” to be at the top of everyone’s feeds.

Obviously, this app is a joke. But the parody makes a good point about people’s online activism and grief after something awful happens in the news—especially when it comes to how people post on social media after violence plagues “those countries,” like Turkey. It’s savagely on-point.

The Thoughts & Prayers app is the perfect way to be a good person while never having to leave your couch.