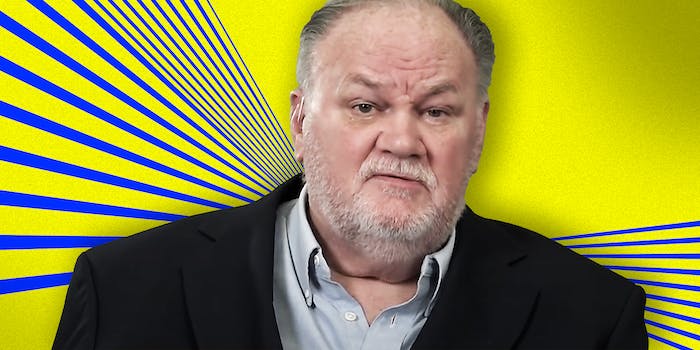 'When they decide to talk to me, I’ll stop talking to the press.'

The fallout from Oprah Winfrey’s interview with Prince Harry and Meghan Markle continues as one of the people who has helped perpetuate the attacks on Markle by the U.K. tabloids has now weighed in.

While Markle didn’t specifically address her estranged father, Thomas Markle, during the portion of the interview that aired Sunday night, Thomas came up in a clip that aired on CBS This Morning Monday morning after Winfrey asked Markle about whether she felt betrayed he had done.

The estrangement largely sparked from Thomas Markle working alongside the U.K. tabloids ahead of her wedding to Harry (including staging paparazzi photos). After the wedding, Markle wrote a letter to Thomas begging him to stop speaking with the press, which eventually leaked to the tabloids. (Markle would successfully sue Mail on Sunday for posting after it “misused her private information and infringed her copyright” by publishing portions of the letter.)

But the estrangement between Markle and her father also has to do with lies that Thomas told his daughter about those stories, according to Markle. Ahead of the wedding, Markle noted that the tabloids were obsessed with locating her father, and once they found him, they moved in next door and across the hall from his apartment. When Markle discovered that the tabloids were about to publish those stories, she contacted him and said that it was possible to get the story killed—but it was a card that, if Meghan and Harry used it to protect Thomas, they wouldn’t be able to use it to protect their children one day.

“I said, ‘I just need you to tell me, and if you tell me the truth, we can help.’ And he wasn’t able to do that,” Markle explained. “And that for me has really resonated, especially as a mother. And also me saying just full-stop, ‘if we use this to protect you, we won’t be able to protect our own children one day.’ Well, I’m talking about your grandchildren.”

In contrast, Markle noted, her mother has never spoken to the U.K. tabloids even amid four years of negative—and often racist—coverage of Markle.

In an interview with Good Morning Britain, Thomas Markle admitted to lying to Markle, said that “California [where Markle and Harry currently reside] is racist” while denying that the royal family is racist.

He also said he would continue talking to the media until Markle and Harry speak to him again, noting that “when they decide to talk to me, I’ll stop talking to the press.”

If Thomas Markle was trying to gain sympathy by threatening to continue doing interviews until his estranged daughter spoke with him, he wouldn’t find it. Many viewers were aghast as they saw Thomas Markle use manipulative and emotionally abusive tactics to get contact with Markle again.

Others poked holes through Thomas Markle’s story, such as when he said he hung up the phone after communicating with Harry by text.

And others pointed to ITV (the channel that Good Morning Britain airs on) as supporting harmful behavior by featuring Thomas Markle in the first place.

In her comments with Winfrey that aired Monday, Markle didn’t appear like she was ready to reconcile with her father, pointing to how he wasn’t willing to protect his child.

“I look at Archie, I think about [her unborn daughter] and I go, I genuinely can’t imagine doing anything to intentionally cause pain to my child,” Markle said. “I can’t imagine it.’ So it’s hard for me to reconcile that.”

Two days after Harry and Markle’s interview with Winfrey, Buckingham Palace (on behalf of Queen Elizabeth II) released a statement addressing it.

“The whole family is saddened to learn the full extent of how challenging the last few years have been for Harry and Meghan.

The issues raised, particularly that of race, are concerning. While some recollections may vary, they are taken very seriously and will be addressed by the family privately.

Harry, Meghan and Archie will always be much loved family members.”