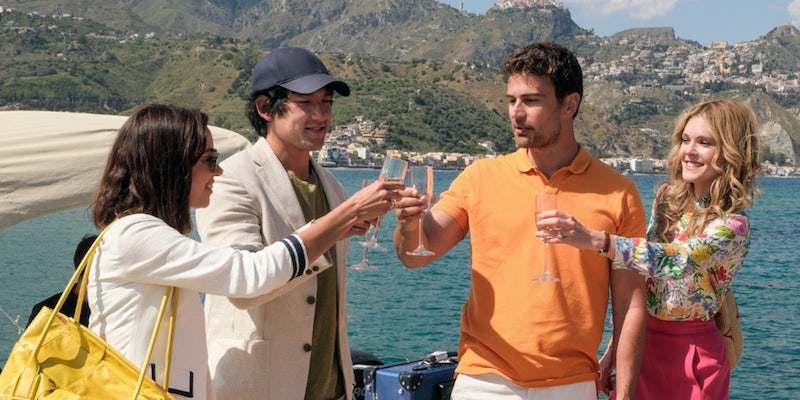 ‘The White Lotus’ season 2: A sexy, annoying trip to Italy

The new season looks at the lies we tell ourselves.

The White Lotus season one was something of a Hail Mary for panicked HBO execs at the start of the pandemic; they needed content, creator Mike White had done Enlightened, and the series probably wasn’t meant to have a follow-up.

But the critique of class and wealth was a surprise hit last summer, and it scooped up a bunch of Emmys, and now White has dropped the next installment in the sea alongside other rich tales of doomed one-percenters.

Like season one’s pilot, season two opens by foreshadowing death(s), leading to the unanswered question of why so many people seem to be dying at this hotel chain. Season 2 takes place at another White Lotus location along the Sicilian coast, which makes a gorgeous backdrop for sexual and emotional dysfunction. Jennifer Coolidge’s Tanya returns from season 1, a dark cloud still following her, along with now-husband Greg (Jon Gries). Aside from them, we get a new round of wealthy, flawed guests.

Three generations of men, played by F. Murray Abraham, Michael Imperioli, and Adam DiMarco, are in town to explore their Sicilian roots, and reluctantly wrestle with their entitlement issues. The youngest, Albie (DiMarco), looks down at his father and grandfather’s view of women, but he doesn’t quite realize how his righteous “nice guy” persona makes him look.

There’s more toxic masculinity in the form of Cameron (Theo James), a copy of season one’s Shane (Jake Lacy), though after a few episodes his braying rich-guy persona starts to get a bit old. He’s flanked by agreeable wife Daphne (Meghann Fahy), but their outwardly perfect relationship is side-eyed by Harper (Aubrey Plaza), whose new-money husband Ethan (Will Sharpe) is college pals with Cameron. But I did not buy that these two men would ever be friends.

Plaza is the standout in their power-couple quad, suspicious of Cameron and Daphne and acting with her eyes, as she does, even as Daphne puts some new thoughts about marriage and money into her head. Unfortunately, those thoughts aren’t that revolutionary.

Haley Lu Richardson is another standout as Tanya’s reluctant assistant, Portia, and offers a reality check in a monologue about how people come to beautiful places like this only to take the same pictures in the same places. Unfortunately, Tanya’s storyline is a little too lean, and we only get some fun from her when she meets a group of gay men led by Quentin (Tom Hollander), who shows her the beautiful things she yearns for.

Sexual agency and inequity might be the overarching theme this season: Season two’s hotel manager, Valentina (Sabrina Impacciatore), is given much less attention than season one’s Armond, but the show twists the upstairs-downstairs narrative with the addition of two sex workers, Mia (Beatrice Grannò) and Lucia (Simona Tabasco), who stake out the hotel in hopes of changing their fortunes. Lucia is a little more jaded, telling the newer Mia that “whores always get punished,” as gilded Italian art looks down on them. While White doesn’t get too deep into the implications of sex work (and probably isn’t the person to do so), Mia and Lucia’s actions set several plot points in motion, and the show takes more excursions outside the resort this season, making it feel less claustrophobic. (And adding in local history.)

By the end of the five of seven episodes sent out for review, you don’t get a sense of who might end up floating in the Ionian Sea, but I also felt myself caring less than I did with season one. While the writing is still biting and the characters interesting, the show isn’t as much a mystery as it is Instagrammable misery.