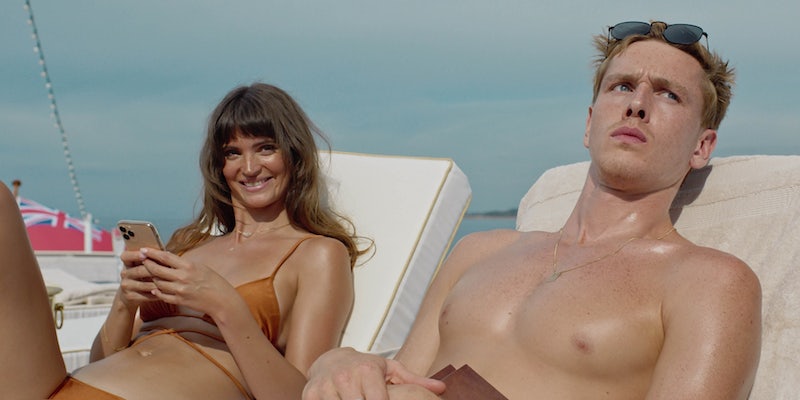 Set on a luxury cruise, this dark comedy feels like a psychological experiment crossed with the gross-out humor of 'Jackass.'

As long as you have a strong stomach for social humiliation and projectile vomiting, Triangle of Sadness is one of the funniest films of the year. Swedish writer/director Ruben Östlund (The Square; Force Majeure) specializes in social satires that veer from broad slapstick to emotional torment, and with Triangle of Sadness, he takes on the privileged world of a luxury cruiseship.

Release Date: Oct. 7, 2022 (theaters)
Director: Ruben Östlund
Winning the Palme d’Or at this year’s Cannes Film Festival, this dark comedy takes place on a luxury cruise populated by super-rich passengers and their beleaguered staff. With pitch-perfect performances from the ensemble cast, it’s a hilarious and gruesome satire about modern capitalism.

Fashion models Carl (Harris Dickinson) and Yaya (Charlbi Dean) lead an international cast of cruise passengers and overworked staff; a couple who aren’t technically “rich” by the standards of the setting, but still have enough social power to lord it over the ship’s employees. Between Carl’s passive-aggressive equivocating and Yaya’s manipulative nature, their relationship is excruciatingly uncomfortable to witness, providing plenty of material for the film’s morbid fascination with inequality. And that’s before they get onto a ship full of eccentric millionaires, with Carl acting as Yaya’s glorified Instagram photographer, serially emasculated by his lack of material power.

Clocking in at 149 minutes, Triangle of Sadness is ambitious in scope, split into three chapters that are best enjoyed with minimal spoilers. (Unfortunately, the trailer does give slightly too much away.) Fueled by a very Scandinavian style of dark humor, Östlund weaves a chaotic narrative around a simple premise for anti-capitalist satire. Cruise ships have long been a cinematic symbol of wealth and glamor, and Triangle of Sadness strips this idea for parts.

Most obviously, the cruise isn’t actually fun. There’s very little to do once the guests are onboard, unless you enjoy formal dinners where you’re seated next to annoying strangers. And in one way or another, everyone in the ship’s hierarchy is frustrated by their lot in life. The wealthy passengers are dissatisfied by meaningless flaws—for instance, complaining to the captain that the sails look dirty. This keeps the above-deck staff in a constant state of high alert, catering to their customers’ most ridiculous whims. At the bottom of the food chain, the support staff clean up after everyone’s messes, represented in a hilariously biting performance by Filipina actress Dolly de Leon.

Östlund has a real talent for eking the last possible drop of tension from every interaction. Carl spends far too long trying and failing to switch off his hotel room lamp. A cruise ship waitress struggles to keep her smile in place as a difficult passenger pressures her to get into the pool. Everything is engineered to keep the audience off balance, from the queasy cinematography to the amusingly varied soundtrack choices.

With no interest in subtlety, Triangle of Sadness balances its blunt anti-capitalist themes with extremely precise characterization—which is why the long runtime is a feature, not a bug. The three-part structure gives us time to meet these characters as archetypes (the self-centred Instagram influencer; the rude Russian oligarch; the drunk sea captain) and then watch them be put through the wringer. Somehow we almost come to sympathize with them, even when they’re repeatedly failing to learn anything from their experiences. Crucial to this journey is Östlund’s unique choice of an ensemble cast. The surprise friendship between Zlatko Burić (the oligarch) and Woody Harrelson (the captain) is a highlight, but really everyone here is bringing their A-game.

The tone can best be described as the cast of Succession, trapped in a psychological torture chamber designed by the puerile minds behind Jackass. Certainly an acquired taste, but if you can handle it? What a gift.