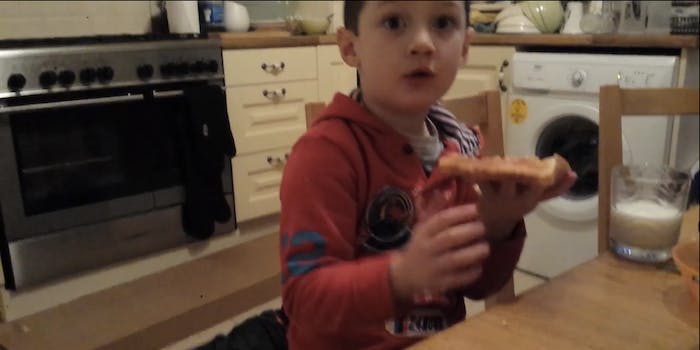 Kid flips out over ice cream and falls into YouTube fame

“The ice-cream van” is a lesson in comedic timing.

Quick question: When was the last time you laughed—really laughed, instead of typing “lol” into a Gchat—at a YouTube video?

This is called “the ice-cream van.” It’s a lesson in comedic timing, the art of the unexpected. It will endure.

Two babies are enjoying a nice snack of beans on toast. One baby smiles. He is standing on a box. He takes a step forward and falls off the box, because he is a baby, and he is drunk—on milk, on snacks, on being a baby. The camerawoman laughs.

The sweet, summertime music of an ice cream truck filters into the kitchen. The older, larger baby’s eyes widen. “THE ICE CREAM VA—” he shouts. His cry is cut short by gravity. He plunges horribly to the floor.

The camerawoman laughs, and we laugh with her.