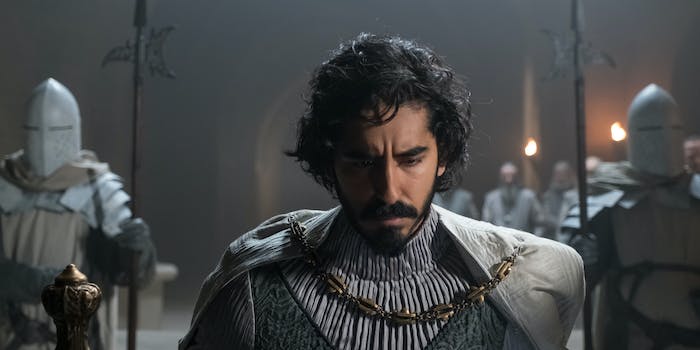 The Green Knight isn’t afraid to get weird. Sure, it might seem like a trite thing to say when you’re talking about a film adapted from a more-than-600-year-old poem that involves an eldritch creature that would feel right at home with The Lord of the Rings’ Ents, a talking fox, spirits, giants, and visions that may or may not be real, but adaptations of Arthurian legends tend to come with a decent amount of baggage. There’s far less swordsmanship in The Green Knight than you’d expect: The most we see of an epic battle on-screen is its aftermath, an eerily quiet field laden with corpses waiting to decompose.

Release Date: July 30, 2021
Dirextor: David Lowery
Release: Theatrical
‘The Green Knight’ adheres to its more surreal roots as it follows King Arthur’s nephew on his strange and mythical quest to meet with the Green Knight to finish an encounter that began a year prior. Using the charm and talents of Dev Patel to its full advantage, David Lowery’s haunting take on the 14th-century poem is a visual feast that feels remarkably fresh.

But despite the lack of swordplay, David Lowery’s masterful adaptation flourishes. Often fluttering between reality and a dreamlike existence and embracing the mystical elements of its source material, The Green Knight revels in its own ambiguity. With a fantastic performance from Dev Patel at its helm and visuals that pop on the screen, The Green Knight more than steps up to the mantle it sets up for itself.

What might we, a modern audience, find in a tale of one knight’s chivalric quest? Plenty. Sir Gawain and the Green Knight, first written by an anonymous author in the 14th century and later translated into English by the likes of J.R.R. Tolkien (among many other academics), is an ultimate coming-of-age story. It sets a character on a clearly defined quest and tests him physically, mentally, and morally every step of the way. We might not think of honor and chivalry the same way Sir Gawain does, but we can understand a man’s struggles with society’s expectations laid upon him and, above all else, to keep his word—even when it might lead to his doom.

And what a word that will be. After a cryptic hint of what’s to come—and a reminder that this isn’t your standard Arthurian tale—as Gawain (Patel) sits on a throne and his head catches fire, The Green Knight opens up on Christmas Day. Gawain, not yet a knight, nowhere near as virtuous and chivalrous as the original poem suggested, and every bit the wayward son who’d rather live an easy life than meet a preordained destiny, wakes up in a brothel; his lover Essel (Alicia Vikander) is by his side.

He races home to attend a feast hosted by King Arthur (Sean Harris) and Queen Guinevere (Kate Dickie), both of whom are years removed from their legendary rise to power and prominence; they’re older and frailer than we’re used to seeing them. Gawain, Arthur’s nephew, is invited to sit with them but he immediately feels out of place at such a high spot among the knights of the round table; Guinevere asks Gawain for a story, but Gawain insists that he has none to tell. You have no story to tell yet, she responds, not unkindly.

Arthur holds court over the holiday feast, a celebration rife with Christian imagery in every movement, but dancing alongside it is the more naturalistic Pagan rituals enacted by Morgan Le Fay (Sarita Choudhury)—Arthur’s sister and Gawain’s mother—and her sisters; she’s pulling the strings, but her intentions seem to be less nefarious. And, just as Gawain mentions having never had an adventure, the Green Knight (Ralph Ineson) enters with an adventure wrapped up in a bow and disguised as a Christmas game: Pick a man to land a strike on him, and in one year, that man must seek out the Green Knight to return that blow in kind. Gawain takes up the challenge, lobbing off the Green Knight’s head with one swipe of Excalibur. “One year hence,” the Green Knight reminds him after picking his head off the ground. A year seems so far away until it doesn’t; a puppet show recounts Gawain’s legend, the tale changing in the retelling just as it does aurally.

Lowery’s script expands upon the kinds of encounters the original poem mentioned only in passing, making each encounter feel as if Gawain is wandering through a dream as he meets a scavenger (Barry Keoghan) who’s more than happy to take Gawain’s effects off him, a young woman (Erin Kellyman) in search of closure, a fox who follows him to his destination, and wailing giants wandering in the countryside. “Are you real, or are you spirit?” Gawain asks one character. “What is the difference?” they respond.

Often, Gawain presses on his quest in silence, leaving us only Daniel Hart’s haunting score and the Irish landscapes standing in for The Green Knight’s wilderness and the sounds it elicits to speak; the closer we get to the Green Chapel, the more unwieldy it becomes. It’s a purview that conveys much more than words can, similar to Lowery’s surrealistic A Ghost Story and even Lowery’s highly underrated Pete’s Dragon remake.

But DP Andrew Droz Palermo’s cinematography, alongside Patel’s expressive face showing us the internal conflict, gives us plenty of insight into Gawain’s struggles with the principles he holds dear even as he walks closer to his own end. When tied up and seemingly left to die, we’re shown a vision of what might happen as his body deteriorates, the camera circling around before it reverses the passage of time. When Gawain descends into a body of water to retrieve something precious, he rises instead of falls to meet the task at hand. A particularly intricate and daring sequence that has plenty to say about chivalry, honor, and masculinity gives us a view of Gawain that we haven’t seen before, one that’s compelling and discerning all at once. The Green Chapel, where the final encounter is to take place, is adorned in shades of yellow, the same color as the cloak that makes him stand apart from everyone he encounters. It’s opaque and intriguing all the same.

Sir Gawain and the Green Knight is famously the kind of text that people have written entire dissertations about, English majors spend entire semesters studying it, and academics—yes, even Tolkien—can spend a lifetime pouring over without grasping its full meaning. It’s only fitting that The Green Knight’s own obscure nature—a seductive narrative that’s every bit as captivating on the screen—might offer plenty for us to sift through.

The Green Knight debuts in theaters on July 30.