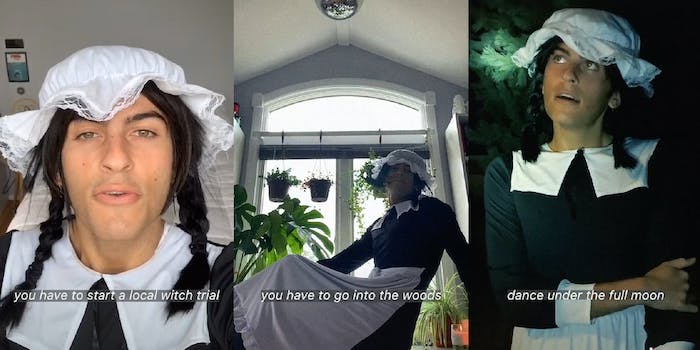 Why is ‘The Crucible’ so popular on TikTok?

The play about witchcraft is resonating with Gen Z.

The Crucible, Arthur Miller’s 1953 play about the Salem witch trials, is seeing yet another adaptation on TikTok.

As the A.V. Club details, The Crucible, which was also made into a 1996 movie starring Winona Ryder as Abigail Williams and Daniel Day-Lewis as John Proctor, has its own fandom. Joe Hegyes’ Crucible series comes complete with period-appropriate attire, but adds in some modern-day dialogue and references, like Lana Del Rey. He’s also envisioned Hester Prynne from The Scarlet Letter as a controversial vlogger.

“It’s hard to realize it when you’re a kid in high school because of how tedious the language is, but once you strip that away, the drama of The Crucible really is E! reality show levels,” Hegyes tells the Daily Dot.

This could be an offshoot of WitchTok, or a byproduct of young people having to read The Crucible for school, but framing a story about religious fanaticism and misogyny in the 1690s, in a way TikTok can understand, can only be beneficial. And CrucibleTok isn’t exactly new: There have been plenty of recreations.

“I think we can all derive a lot of entertainment from turning required readings on their heads and essentially reinterpreting them for modern audiences,” Hegyes says. “There’s a reason the classics are classics, but I don’t think stories should be limited to the vocabulary (or style) used to originally tell them.”

The character of Giles Corey, who was (spoiler!) crushed to death, seems to be one fan favorite.

As Miller wrote in 1996, The Crucible was a response to McCarthyism, and he detailed the paranoia and hysteria around communism as he wrote the play: “But as the dramatic form became visible, one problem remained unyielding: so many practices of the Salem trials were similar to those employed by the congressional committees that I could easily be accused of skewing history for a mere partisan purpose.”

Perhaps The Crucible still has some lessons for us right now.