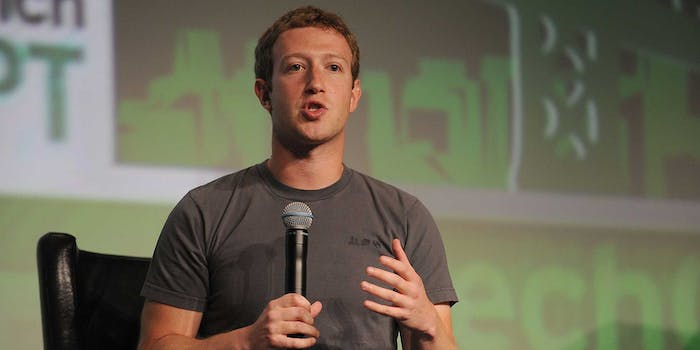 Craigslist poster looking to start a Church of Zuckerberg

What Would Zuck Do?

These days, it’s actually sort of refreshing to see someone who truly admits to loving Facebook rather than complaining about it. And someone out there really, really loves Facebook. Perhaps too much.

Technically, this San Franciscan’s adoration focuses on Facebook CEO Mark Zuckerberg. According to SFist, a recent Craigslist post in the Bay Area reveals that someone is looking to start a religion focused on Zuckerberg, and he wants to know if there are any other disciples out there:

“Hey everyone, so I’m working on creating a new startup religion which features Mark Zuckerberg as God and looking for collaborators who would be interested in working on such a project.

If this is a joke, it is a very developed one. The poster goes on to give detailed concepts this religion will hinge on. Really, the writer’s descriptions are too specific to summarize, so I’m inclined to include a few verbatim:

The exact nature of Mark Zuckerberg in this religion is that he is the Avatar of Jehova, the creator of our universe. In this religion our universe is a simulated matrix world almost like a computer game and humans are all like computer game characters compared to God. The Biblical Jehova is the creator of this simulatrix and while the actual Jehova is a white guy with a big beard just like Michaelangelo painted him, he controls Mark Zuckerberg as his “Avatar” or “character” in our world like you might control a video game character in a video game you were playing…

… The religion has many different Gods and Goddesses, so while the main God is Zuckerberg who is identified as being the Avatar of Biblical creator God Jehova there are Goddesses in his life such as Sheryl Sandberg, Facebook’s COO, who in this religion is Minerva, the Goddess of Skill and Strategy. Then another Goddess is Ashley Arenson who is this girl that Mark Zuckerberg had a crush on in high school who rejected him because she thought he was too nerdy for her, and she is Venus, the Goddess of Love and Beauty. This is an actual real girl that Zuckerberg really had an unrequited crush on in high school, I found out about her because I know some people who went to Zuckerberg’s high school and they told me this girl was his unrequited high school crush and I figured she’d be a great Goddess to put in the religion for a good storyline about how even though Zuck is God he still gets turned by his high school crush who turns out to be The Goddess Venus herself…

… The way I got the idea from this project was I was watching an interview with Joseph Campbell who was a scholar of mythology and Professor Campbell was talking about the world’s myths were all broken or outdated and no longer functioning for our modern society. And he said that the world needed people to create new myths that united the beliefs of different cultures and traditions together as one and it seemed like a good idea Professor Campbell had so that’s how I got interested in this.

The Church of Zuck (not what it’s called but what I shall refer to it as) seems Scientology-like, what with the author’s fascination with storytelling and creating modern-day myths (I’d say no offense, but… offense): “I’m looking to take an approach similar to that of Ancient Greek mythology and Japanese anime where they used to write epic stories and poems about the Gods and Goddesses but with a modern flair.”

Also fun and sort of meta is the fact that the poster sees this religion as its own sort of startup! It’s true: Anything can be a startup!

“If the religion were to become profitable then the people who worked on it will get a share of it like with any startup although personally I don’t care about money so that’s not my motivation in doing this,” Zuckerberg disciple #1 says.

If this thing is to get off the ground, expect less worship and more making of Zuckerberg-related comics and ebooks. Oh and don’t worry, this posting is flagged with “telecommuting OK.” Whew.

The poster closes with a wise warning: “Really though I’m just doing this for fun because I don’t even know if something like this is possible to do on a big level or if it could be popular, so it’s just something I am interested in doing and looking for people who would like to take part without worrying about whether it goes anywhere or not.”