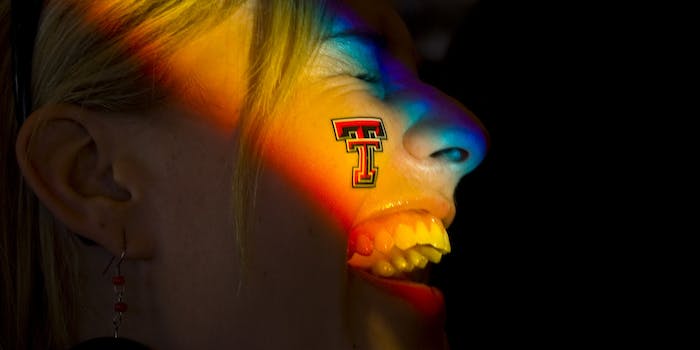 The Internet sees all.

In another example of poor judgement by a major brand’s social media team, Texas Tech’s Athletics Department tweeted out a photo imploring its fans to “celebrate cotton” and “black out” their game against Arkansas this weekend. 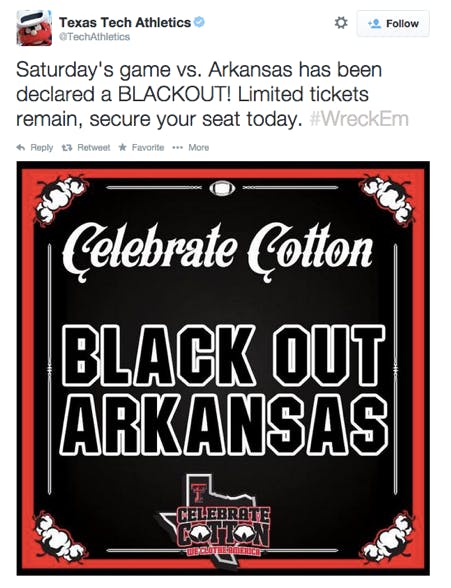 Yes, the cotton plants in the logo do kind of look like two eyes against a black Texas outline. Almost certainly unintentional, but still a terrible idea. An even worse idea to use that logo and urge fans to “black out” for an event celebrating the history of the cotton industry.

The school also seem to have forgotten to erase evidence of the tweet from its official athletics site:

This follows a recent trend of major college athletics departments posting insensitive things on their social media accounts. Just two weeks ago, Oklahoma State University’s official Twitter account favorited a photo of a student sign at their game against Florida State that referenced the Trail of Tears.

“Celebrate Cotton” is a recent September tradition and partnership between Texas Tech University and the Texas High Plains cotton industry. Last year, the school urged fans to wear all white to the game. This year the “blackout” is still scheduled to go on as planned, but you have to wonder if Texas Tech has really thought this one all the way through.

Whiteouts, blueouts, red white and blueouts, and even blackouts can be fun without any racial implication—well, most of the time. But teams need to consider the social and historical implications of those scheduled events. Texas Tech’s Associate Athletic Director Blayne Beal told SB Nation, “‘Blackout’ games are something we do at Texas Tech. Red and Black are our school colors and a ‘Blackout’ game signals that it’s a big game.”

Why couldn’t it have just been a redout, Blayne?