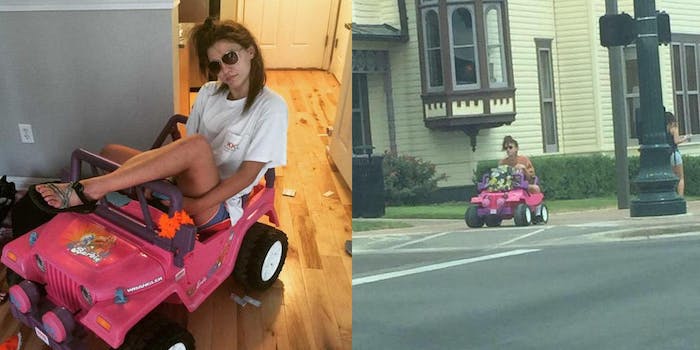 The lyrics from Aqua’s iconic pop hit “Barbie Girl” are well-known to most: “Come on Barbie, let’s go party.” But sometimes, when you party too much, you end up on the wrong side of the law.

After leaving a Waka Flocka Flame concert, Texas State student Tara Monroe had her license suspended for refusing a breathalyzer test during a traffic stop. As a result, her father drove from her hometown to campus and took away her car. The industrial engineering junior was left to pedal around town on her bike.

Soon, however, Monroe had an ingenious idea to get back on four wheels. She checked out Craigslist and found her new whip: the Barbie Jeep. The mini-vehicle was practically a steal at $60. Monroe named her new mode of transportation Charlene, after the little girl who sold it to her.

The Barbie Jeep’s 12-volt battery can rev up to 5mph, a comfortable speed for getting from class to class on campus. But Monroe has also become somewhat of a mini celeb at Texas State—“Barbie Jeep Girl”—tweeted and Snapchatted about whenever she rolls by in her glamorous ride.

According to My San Antonio, Monroe plans on celebrating her 21st birthday in November by driving up to The Square in San Marcos, Texas, with her friends. Let’s hope she has a designated driver after that night out.