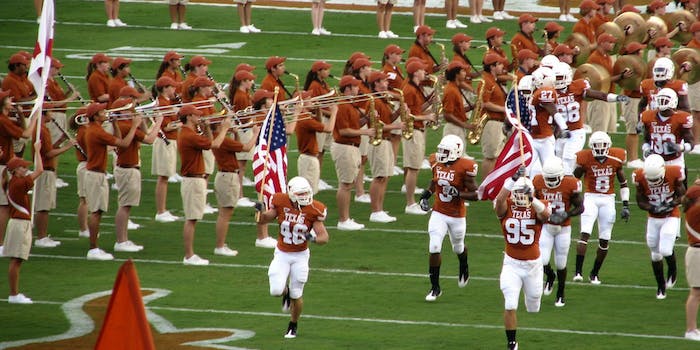 When you're losing horribly at halftime, maybe don't tweet at all?

The University of Texas football team was down 37-0 against TCU at halftime on Saturday. But that didn’t stop one Longhorn player from retweeting a tweet about transferring.

Danny Duron tweeted at several Longhorn players, but Kris Boyd is the one who has some explaining to do. Not only was he tweeting at halftime, but the retweet suggests possible interest in transferring to UT rival Texas A&M.

Boyd was likely flooded with notifications upon returning to the locker room, as the reactions on continue to roll in.

Did Texas really have a player tweeting at halftime? #embarrassing

A Texas player was tweeting at halftime? Yikes

.Tweeting at halftime down 37-0 is not a good look. #TEXvsTCU #TexasFootball.

It’s safe to assume head coach Charlie Strong won’t take this one lightly. But what’s worse when the Longhorns lost to TCU 50-7?