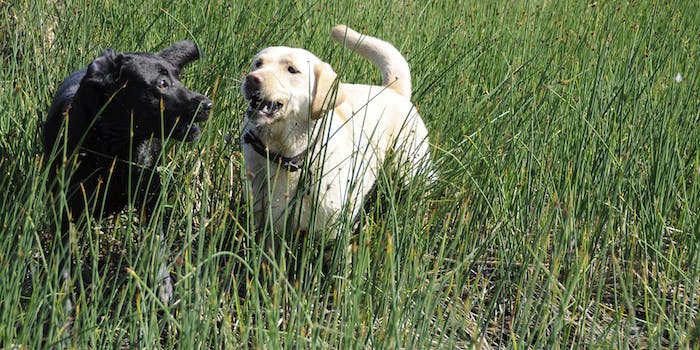 Tim Conatser, a volunteer firefighter with Union Valley Fire Department in Royse City, Texas, is definitely doing Facebook wrong—but that’s the least of his problems. More worrying is the pride he apparently took in shooting a neighbor’s two dogs for wandering onto his lawn.

In a post that went viral after it was shared by one Kimberly Jones, Conaster wrote: “Somebody didn’t put any truth [sic] my warning. Keep your damn dogs on your property.” In the accompanying photo, Spike and Gordo, yellow and black labrador retrievers owned by the family of Pulido Rodrigo, can be seen lying dead and bloodied on snowy grass.

“I’m in shock! I don’t know, I don’t understand these people. Bad people, I don’t know,” Rodrigo told a Fox affiliate, claiming that he never received any warnings, threats, or complaints about the dogs. The Union Valley Fire Department, meanwhile, has stated that its leaders “do not condone the recent actions of one of our firefighters” and have dismissed him in accordance with policy but have no jurisdiction over the case. The Hunt County Constable’s Office and the SPCA will investigate and decide whether to file animal cruelty charges.

Many have reacted to Conaster’s photo with unbridled hostility. “You got away with killing g the right persons dog Mr. Tim,, if that had been my dogs I’d have broken your wrists and ankles and threw u in my hog pen covered in peanut butter,” wrote one commenter on a Facebook page about the story. Others, according to Jones, have defended Conaster’s actions. “I am a dog rescuer. I dedicate my love to it. The only person at fault here is the one who didn’t properly contain their dogs. Sure, this guy shot them, but what if he had livestock he was protecting?” one woman asked.

Jones then followed up with another disturbing photo:

Conaster may have just learned that revenge is a dish best served online.

Photo via smerikal/Flickr (CC BY SA 2.0)