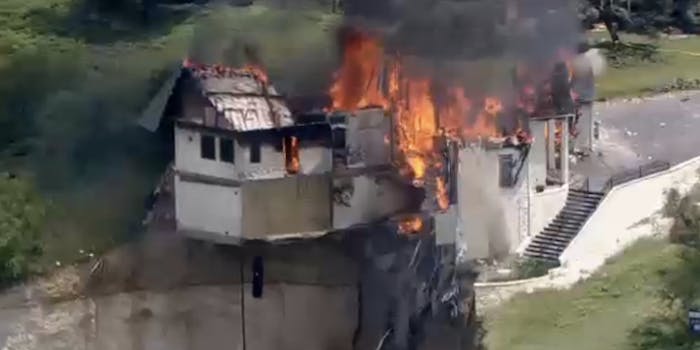 If you can't stand the heat… Well, there goes the kitchen.

A 4,000-square-foot Texas villa condemned a year ago because it was teetering on the edge of a crumbling cliff is now being deliberately burned, the Associated Press has reported.

Chunks of rock and debris have been landing 75 feet below in Lake Whitney, and authorities decided that allowing the $700,000 luxury home to collapse into the water will make for a much harder (and far more expensive) cleanup than a controlled blaze. The owners of the doomed structure consented to this plan of action—which you can watch unfold live via WFAA-TV.

Question now is which way will rest of #cliffhouse fall?? @cbsdfw pic.twitter.com/NkWqnEom8u

The home was built in 2007 and finally abandoned at the end of last month. Some “150 feet of land has eroded since February,” Business Insider reported. The owners remain liable for the cost of removing rubble and detritus. In related news, I’ve never been happier to be a renter.