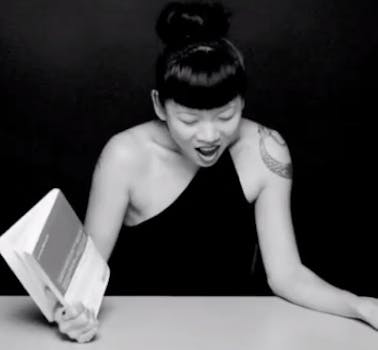 Teresa Nasty goes under the lights (and table) in the latest installment of Clayton Cubitt’s Hysterical Literature.

“‘Touch me you won’t!’ I cried,” stutters Teresa, while getting touched all she wants in the latest edition of Clayton Cubitt’s Hysterical Literature.

Teresa reads from Jeannette Winterson’s postmodern feminist fantasy Sexing the Cherry, occupying the role of a giantess traveling through space and time in search of exotic delights. In Winterson’s novel, the delights are fruit, which serve as metaphors for sexual appetites and knowledge; before Cubitt’s camera, the metaphors are gone, and the delights happen right before our eyes as Teresa reads.

But as she simultaneously laughs and fights for control as she reads, she embodies the paradoxical themes of restraint and release that run through the passage. Winterson’s protagonist links herself to an escaped circus elephant through their respective exercises of freedom and connects her search for pleasure to the authoritarianism of English Puritans:

It is a responsibility for a woman to have forced an elephant into the sky. What it says of my size I cannot tell, for an elephant looks big, but how am I to know what it weighs? A balloon looks big and weighs nothing. …

Oh, they hated everything that was grand and fine and full of life, and they went about in their flat grey suits with their flat grey faces poking out the top. The only thing fancy about them was their handkerchiefs, which they liked to be trimmed with lace and kept as white as they reckoned their souls to be. I’ve seen Puritans going past a theatre where all was merriment and pleasure and holding their starched linen to their noses for fear they might smell pleasure and be infected by it.

There’s a different sort of pleasure in watching Teresa wrestle with her own pleasure. At one point she interrupts her narration with a polite, “Excuse me.” At others she pulls herself together with a concerted effort to continue reading before finally giving in after the line, “There is no earthly power but Satan.”

While previous episodes have played with poetic, musical, and scientific themes, this is the first episode to delve into the religious. Even as the text flouts the idea that enjoyment can be immoral, the visual image of Teresa coming to orgasm onscreen explores the boundaries of erotica and what exactly constitutes illicit material.

But Cubitt told the Dot in August that his goal is simply about portraiture, not prurience.

“I’m quite fascinated with the concepts of control and release when it comes to portraiture,” he said. “[When everyone has a well-practiced notion of personal branding[, w]hat’s left for the portraitist to capture? One can shock the sitter out of that plastic smile.”

Session 5 is a practical case study in watching Cubitt achieve his goal. “I’m attempting to lead them back to something real,” he told the Dot. The smile on Teresa’s face is inarguably that.