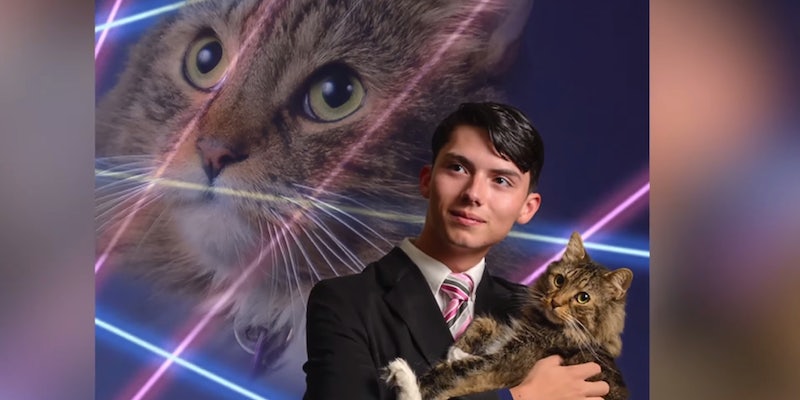 It's not a senior portrait. It’s even better.

Draven Rodriguez, the teen who petitioned for a senior portrait with his cat Mr. Bigglesworth and a bunch of lasers, will get his photo in the yearbook—along with one that’s arguably even better.

Rodriguez made the news after his petition to get the photo, inspired by Awkward Family Photos and complete with ’80s-style lasers, went viral, and while officials at Schenectady High School didn’t reject the photo, he wanted to be ready just in case.

He ultimately lost that battle, but according to Schenectady Principal Diane Wilkinson, it wasn’t because she didn’t like the photo.

“Being principal of 2,400 kids, you want to think of all the kids who want to have a professional shot that looks consistent in that area,” she told the Times Union. “I loved Draven’s picture so much.”

Rodriguez had to take a new senior portrait photo—one where he still got to wear a lapel with Mr. Bigglesworth’s face on it at least—but then Wilkinson came up with an even better compromise. The cat photo would still appear in the yearbook, albeit in a different section of the yearbook, but then she wanted to do a joint photo to advocate animal rescue and adoption. Any donations would be forwarded to the Animal Protective Foundation in Glenville, N.Y.

They sat for the portrait, and while it’s rare that the redo would be better than the original, this photo of Rodriguez, Mr. Bigglesworth, Wilkinson, and her chihuahua Vivienne might just be that exception.

Plenty of things could’ve gone wrong during the shoot with the pets involved, but according to photographer Vincent Giordano, it went off without a hitch.

“Dianne and Draven were all laughs, they really enjoyed the photo session,” Giordano said. “Vivienne and Mr. Bigglesworth really broke the rules of cats and dogs and got along famously for a trouble-free photo session!”