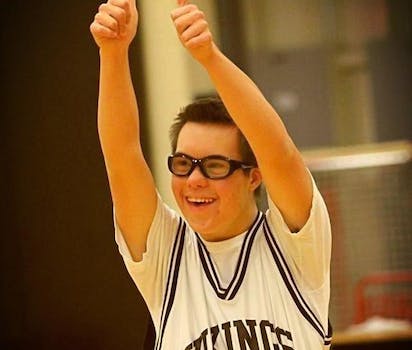 Teen with Down syndrome makes SportsCenter

Owen Groesser, 13, scored 6 points in 2 minutes during the last basketball game of his junior high team's season, and his friends and family rallied to get him on SportsCenter's top 10 highlights.

Thanks to Twitter and some fine basketball skills, Wednesday was likely the best day of 13-year-old Owen Groesser’s life.

It all started during the final basketball game of the season, when the junior high student with Down syndrome was substituted into the game for the first time.

“Groesser received a pass beyond the arc and sank a 3-pointer, sparking a wild celebration in the stands,” ESPN reported. “Groesser also made another 3-pointer, finishing with six points in approximately two minutes of playing time.”

The crowd went wild, and so did the Twitterverse. The Twitter hashtag #GetOwenOnSportsCenter became a nationwide trending topic with more than 27,000 mentions. The following image was also included in many of the tweets calling for Groesser to be featured on ESPN’s flagship program. 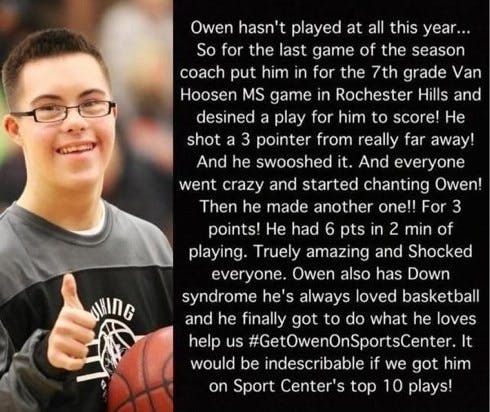 The Twitter hashtag was a success “as Groesser’s exploits were featured on ‘SportsCenter’s’ Top-10 highlights Wednesday night,” ESPN reported.

The moment was one Groesser and his family would never forget.

“It was like a movie,” Groesser’s father Chris told the Detroit Free Press. “Like the junior-high Rudy.”