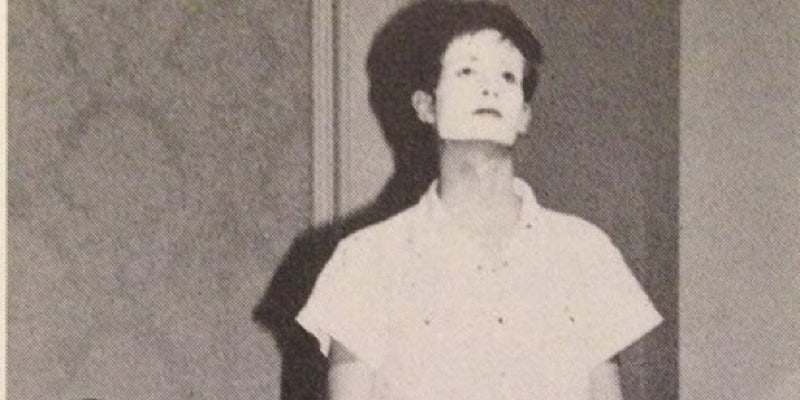 Houston, Texas. 1987. In the beginning, there was Ted Cruz. He was in high school, and he was a mime.

Cruz stood shoeless on stage, his tortured face caked with white makeup. He was playing the role of Adam in a stage adaptation of the book of Genesis. Behind Cruz stood God, hanging his head. God was also a mime, and He had created a race of mimes in His own image. 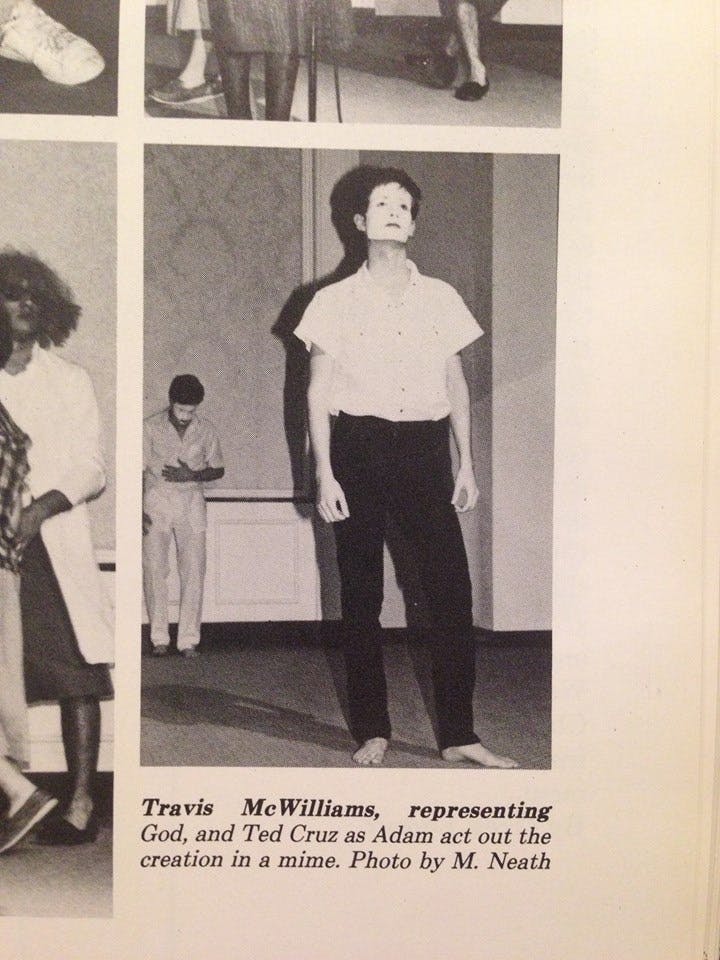 Cruz has been described by those who met him in high school as a hard-charging transfer student whose gusto for answering questions in class was “intimidating.”

In his 2015 book, a Time for Truth, Cruz  wrote that he’d made a conscious decision to become cool in junior high, and so undertook a study of how to convincingly simulate “cool.”

“I remember sitting up one night asking a friend why I wasn’t one of the popular kids. I ended up staying up most of that night thinking about it. ‘Okay, well, what is it that the popular kids do? I will consciously emulate that,'” he wrote. He swapped his glasses for contacts, got into sports, went to a party, and once even pulled a prank.

It was, by some accounts, not a success.

“I think this is a lifetime struggle of his; he couldn’t relate to us as a group of teenagers. He really struggled in trying to be part of a group dynamic, and the jokes,” Laura Calaway, who knew Cruz from a debate club called the Constitutional Corroborators, told the Guardian.

But even as Cruz strove to assimilate, he remained laser-focused on building a perfect resumé. His extracurricular activities included speech competitions, Constitutional debate, and, yes, drama.

“Cruz loved being on stage, even if it meant being the villain,” NPR has reported, much to the surprise of no one. “In junior high school, he had played Rolfe, the young Nazi in The Sound of Music. He landed the role of the murderer Bill Sikes in Oliver during high school.”

Cruz transferred to Second Baptist High School in his junior year, when this photo was apparently taken. By the time he was a senior, he had taken over the drama club. His yearbook entry notes the aforementioned role in Oliver, plus an unspecified credit for Papa Was a Preacher. It does not mention that he was molded by a deity into the world’s first mime.

“I was in 5th grade and didn’t really know [Cruz],” recalled Clint Rosenthal, the tipster who sent the mime photo. “I assume I was in the audience since that appears to have been during Chapel. I guess I suppressed that memory.”

“What I can say,” Rosenthal continued, “is that the biblical version of the creation of man (and ladies from Adam’s rib, etc.)—the subject of Cruz’s interpretive mime performance—was taught pretty literally there, so I’m betting a lot of folks in the audience were thinking he nailed it. Hell, it made the yearbook.”

“M. Neath,” the person who took the photo, would surely know more. I found a smattering of search results for a Mark Neath, about Cruz’s age, and contacted him via email.

“I was a classmate of Ted’s at Second Baptist School and a photographer on the yearbook staff, so I evidently did take the photo,” Neath wrote back. “I cannot confirm that it is Ted, but it certainly looks like him. The photo captions were pretty well-researched, and it was a very small school, so it would be surprising if it is wrong.”

Sadly, Neath didn’t remember anything more about the mime show. But, like other Second Baptist schoolmates who have spoken publicly about Cruz, he’d marked the future senator’s aspirations and swaggering self-regard.

“I do distinctly remember him boasting that he would become president one day,” Neath wrote. “That’s my greatest memory of him, in fact, since that was a pretty unusual life ambition for a high school student.”

We are by now familiar with the story of Adam, who would go on to the Ivy League and to the Senate, never relaxing his grip on his teenage goal: to ascend to the highest office in the land and have dominion over every creeping thing that creepeth upon the earth.

In a 1988 video posted anonymously on YouTube, Cruz jokes—but is he really joking?—that his ambition is to “take over the world. World domination. Yeah, rule everything. Rich, powerful, that sort of stuff.”

But what of God, standing there on stage behind Cruz? All attempts to contact Cruz’s co-star, Travis McWilliams, led to dead ends. Listed phone numbers belonged to someone new, or were disconnected—and he doesn’t appear to have an email address.

But McWilliams, class of ’88, did attend Second Baptist homecoming in 2011, according to the school’s alumni magazine, The Eagle.

So did Doug Daniels, who graduated a year behind Cruz. Earlier this year, Daniels told NPR, “I don’t think you’ll find a single person who knew [Cruz] in high school who is at all surprised where he is now.”

Whatever his faults as a human teenager, we can say this for young Ted Cruz: His classmates never doubted he would find himself running to become the first mime president.