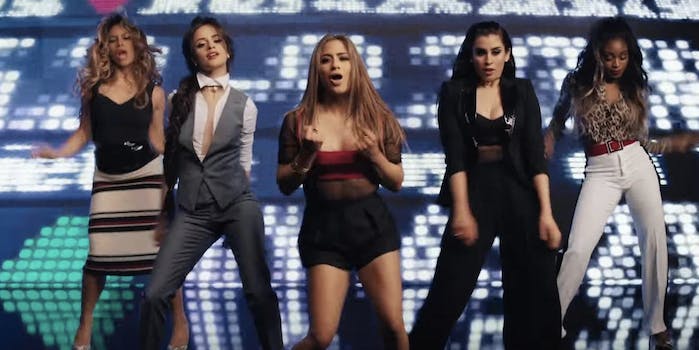 Thanks to a single iconic Vine, teens are banding together and disrupting Fifth Harmony concerts with a popular meme.

Earlier this summer, people were remixing Tanisha Thomas’s iconic tirade from Bad Girls Club with some of the summer’s most popular songs. For those unfamiliar with the moment in pop culture history, Thomas stormed through the reality show’s house, clanking metal baking pans together, shouting, “I didn’t get no sleep ’cause of y’all, y’all not gonna get no sleep ’cause of me.”

Thomas’s masterful percussion and lyrics matched perfectly with numerous radio hits; Fifth Harmony’s “Worth It” was one of them.

The Fifth Harmony/Tanisha Vine remix has over 25,000,000 loops, becoming a cornerstone of youth culture online. Teens loved it so much that they’ve even started to sing Tanisha’s lines whenever they hear the song.

And then, this past week, concertgoers at two separate Fifth Harmony performances stood strong with the Vine remix, dutifully adding Thomas’ lines to “Worth It” with Ally, Normani, Dinah, Camila, and Lauren just feet away from them.

LMAO AT THE CROWD SINGING I DON'T GET NO SLEEP CAUSE OF Y'ALL https://t.co/emQbivqycA

The Vine Twitter account even piped up, acknowledging a trend that had jumped from a short little video to real-life phenomenon.

It’s unclear how exactly the music group feels about these sing-alongs at their concerts, but band member Camila has retweeted both videos. So we’re guessing they’re not too annoyed—or at least just playing along.