Tampa's 911 operators have to put up with serious monkey business.

With the Christmas season upon us, there’s a bit of holiday magic and mystery in the air. But folks in Tampa, Fla., weren’t calling 911 to report a jolly old white man riding in a sleigh or any of his eight reindeer flying about. Instead, these concerned Floridians were calling in with reports of a monkey on the loose. And not a tiny capuchin—a big ol’ three-footer.

It all began on Thanksgiving day, when the police department first received reports from concerned and baffled citizens who had seen a primate running along the river in their community. 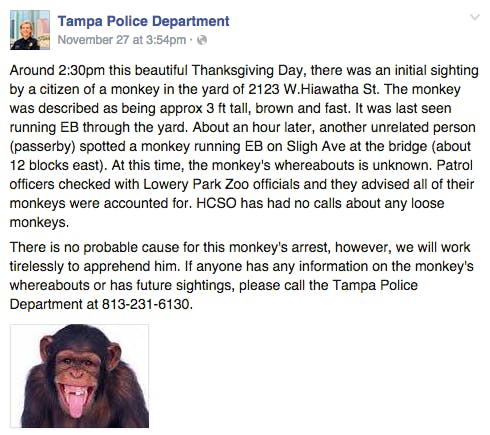 But what sounded like the tryptophan-induced hallucinations of someone stuffed to the gills with turkey turned legitimate when more calls began pouring in. A monkey on the loose! To get the word out about the primate at large (and, really, to have a laugh), the Tampa police compiled these 911 calls and posted them to their Facebook on Monday.

With no known primates missing from the local zoo, or any civilians reporting a lost pet, the police are at a loss as to where the beast might have come from.

But for some citizens, this monkey business feels all too familiar. The dedicated Facebook page Mystery Monkey of Tampa Bay is calling this the beast’s comeback: In 2012, Tampa was plagued by an AWOL ape.

We’re grateful for the laughs, but we hope the hairy fella returns home safely.