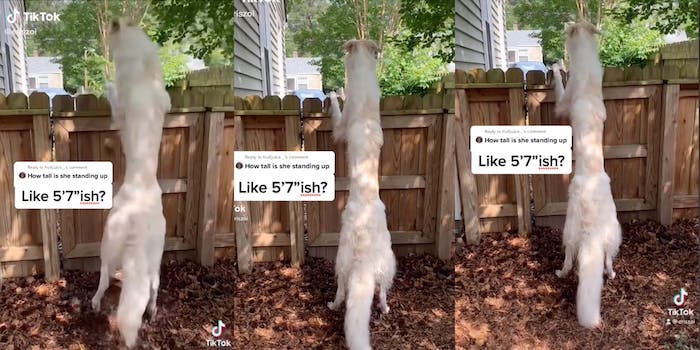 A “tall” dog is giving people pause after its owner posted a video describing their height as being “5’7″-ish.”

The video shows a light tan Borzoi, a breed of dog also known as a Russian hunting sighthound, standing on its hind legs to look over their owner’s fence.

The video has gained 1.9 million likes and 14.6 million views on the platform as of July 29.

Commenters alleged that the animal is “not a dog,” but instead a myriad of other things.

“That’s not a dog, that’s a giraffe,” wrote one commenter of the dog’s standing height.

Another user thought they were a llama from behind.

According to the TikTok page, @eriszoi, the dog’s given name is Eris, Queen of Snoots. She has over 605,000 followers on the platform, and most of the content shared to the account is of daily life for her and her owners.

Given the unique appearance of the Borzoi breed, one commenter wrote that she calls them “chopstick dogs.”

It’s not clear what the average height of a Borzoi is while standing on their hind legs, but when on all fours, the average falls somewhere between 28 and 32 inches at the shoulder. That’s between two and three feet in height.

“How is a dog taller than me OMFG this is unfair,” one commenter wrote of the dog’s height.

Eris the Borzoi also has a friend named Clarice, a bully breed; the two play together in the yard.

The Daily Dot has reached out to Eris’ owners on TikTok.