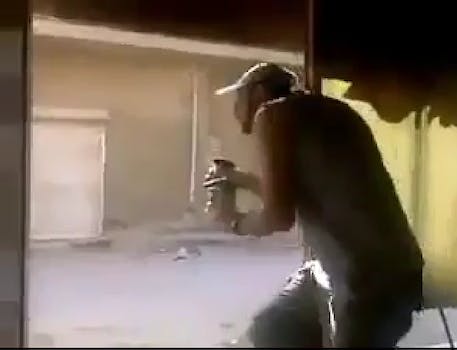 Here's what Syrian rebels think of John Kerry's offer of $60 million in aid (for everything but guns).

After two years of equivocation, the Obama administration finally committed to sending direct aid to Syria’s rebel forces last week. But the hefty sum of $60 million promised by new Secretary of State John Kerry comes with one major caveat: No weapons. We’ll pay for food, medicine and governance, Kerry said, but not guns.

How has that gone over with Syrian rebels themselves? Not particularly well, if this video posted by a rebel group to Facebook is any indication.

In the video, cartoon sounds of gunfire play as rebels duck out of cover to fire into a deserted urban landscape—using water bottles, dainty perfume bottles, and at least one chair. The video stops short of saying Kerry’s $60 million is about as valuable as piss in the wind, but just barely.

The United States is worried that any arms it sells to Syrian rebels will find their way to other hotspots in the Middle East, from terrorists in Iraq to Hezbollah in Lebanon. But the government’s hesitation comes at a cost: The goodwill of the Syrian people, who are desperate for more help in ending a war that’s left 70,000 people dead.