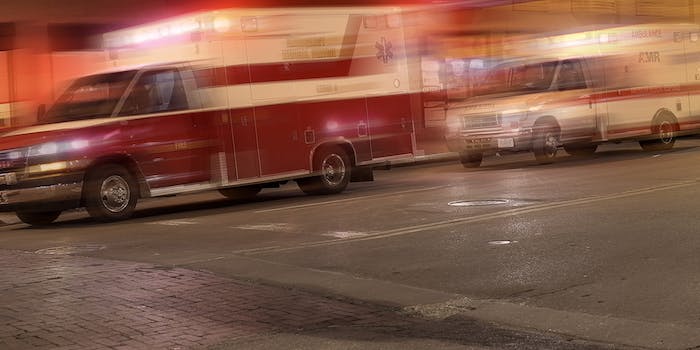 Tragedy on the first night of the SXSW Music Festival.

Last night, at around 12:30am, a car sped the wrong way down 9th Street in downtown Austin, drove through a barricade blocking off Red River, a main SXSW thoroughfare, and plowed through a crowd in front of the popular music venue Mohawk. The crash left 23 injured, and two dead.

In a press conference held just after 2am, Austin police chief Art Acevedo said the chase began when a man driving a grey sedan was stopped by police under suspicion of DUI, at a gas station on 9th and the I-35 access road. He then sped off, up 9th, and then down Red River, leaving bodies strewn up and down the street in front of Mohawk. He struck a man and woman on a moped around 11th Street, killing them. Officers pursued the driver on foot, and tasered to detain him. The incident happened during the first night of the SXSW Music Festival, so photos from attendees quickly began filling social media.

Here’s the scene outside of Mohawk right now at #sxsw after a car ran through dozens of people. pic.twitter.com/XwdspxOf3o

The names of the deceased and injured have not yet been released, and Acevedo urged witnesses not to upload videos to YouTube. One video was uploaded and circulated last night, showing the graphic scene just after the crash, and offering interviews with witnesses.

Acevedo: “I would urge you to respect the victims. I ask that on behalf of the deceased victims we do not post any videos all over YouTube.”

The driver is currently in custody, and Acevedo said they’ll be filing capital murder charges. There will be a 10:30am briefing this morning, with updates.

Update, 9:30am: Dr. Christopher Ziebell, an emergency physician at Seton Medical Center, says two victims are still in critical condition, both with head injuries. Those patients were not conscious when they arrived. He said the “vast majority” of those injured were in their 20s. The driver was one of two treated and released. They’re still awaiting family members from out of town.

Update, 10:40am: Austin-Travis County EMS chief of staff James Shamard confirmed 23 patients were taken in, and two were pronounced dead on the scene. Two patients are still in critical condition, three are receiving treatment for serious injuries.

Roland Swenson, SXSW’s managing director, says they plan to carry on with events today, to “avoid confusion.” They’ll make announcements about any changes in the schedule. Mohawk and Cheer Up Charlie’s are discussing how to proceed with tonight’s shows. APD police chief Acevedo encouraged SXSW to continue with their scheduled events.

Acevedo confirmed the driver struck a taxi, a cyclist, a moped, and a van, as well as pedestrians. He corrected an original report that two people on the moped were deceased. A female passenger on the moped, who was from Austin, was pronounced dead at the scene. The driver was injured but he’s still alive. The cyclist, a man from the Netherlands, was pronounced dead at the scene.

The suspect faces two counts of capital murder, and multiple counts of aggravated assault with a vehicle. His name won’t be released until he is formally charged, but Acevedo stated his act was “intentional.” He asked witnesses to contact the APD with any info at 512-974-5186.

Update, 10:30pm: The suspect police have in custody is 21-year-old Rashad Charjuan Owens, from Killeen. The two deceased victims are 27-year-old Jamie West, of Austin, and 35-year-old Steven Craenmehr, of the Netherlands.