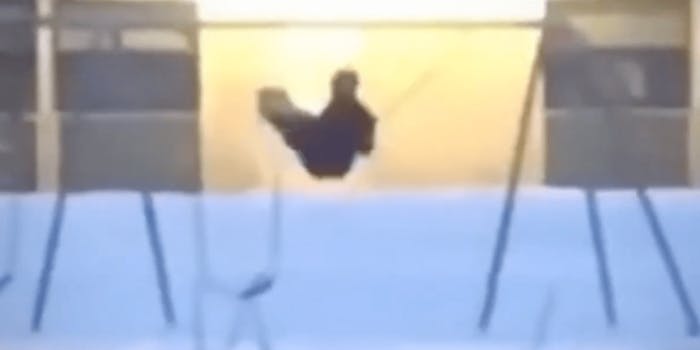 Is he swinging toward the camera or building? Watch ‘the swing’ and judge for yourself

'[I'm] losing my mind can someone tell me which way he's facing(?)'

Welcome to the interwebs, the place that the color of a dress and an argument over the words “Yanny” and “Laurel” become existential value judgments.

On Sunday, TikTok user Eric Tupper re-posted an old clip of his from a trip to Fairbanks, Alaska. It features someone on a swing, in the snow, going up and down—back and forth. But was he facing the camera or the building? It quickly divided loyalties online.

“Re-post cause it blew up on tiktok, which way is he facing?” he asked the internet at-large.

Re-post cause it blew up on tiktok, which way is he facing? pic.twitter.com/hG4DY9rg0v

The muddled footage in the snow and lack of definition in park equipment make this a tough call.

The science of his swing quickly became a hotbed of speculation.

He’s definitely not facing the building because his body can’t just go through the bar like that pic.twitter.com/2dau0UKLh2

I literally thought the same thing until I saw these pictures pic.twitter.com/39vNntZJ5F

Another user inadvertently points out how the “illusion” works via illustration and the caption: “Yeah he’s clearly facing the camera lol.”

The grainy footage and constant motion without much variance don’t help in the selection. That didn’t help people from making sketches and diagrams.

However, the question was answered, apparently. Remember: It’s an old clip.

Just in case people are still checking on this and this account is where I first saw this video (which came out in February this year I just learned) here’s the solution from the guy who was there. pic.twitter.com/Wr8HBTLPi2

A sleuth has already made a whole detail video. Nothing quite like just going outside into the snow and checking it out yourself.