This website promised me a Swedish friend, but all I got was lonely

This was just plain cold.

At its best, the Internet is an incomparable tool for cross-cultural education and personal interconnection. At its worst, it fosters misunderstanding and implacable hatred. And somewhere in between, it does absolutely nothing.

When I first got a tip about a tourism service called Find Your Swede, I was intrigued. I’d never been to Sweden, but it always seemed like a beautiful, sophisticated, and peaceful place full of supermodels. The site promised to answer the question “who would you be if you lived in Sweden?” 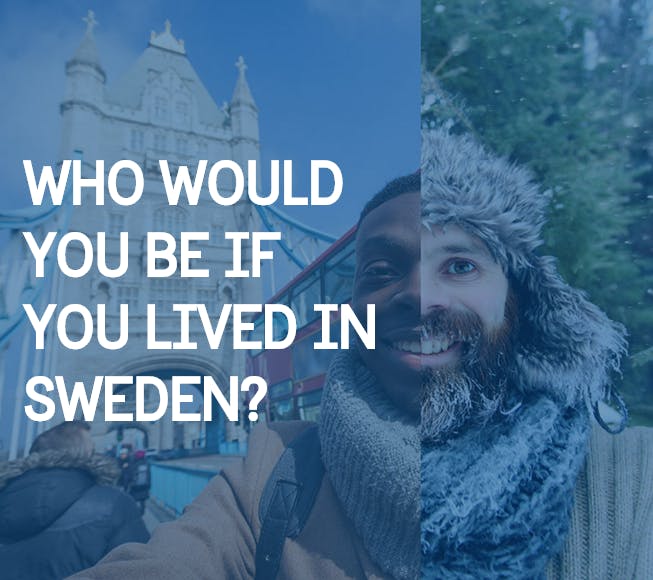 Take our personality test and experience what your life in another country would be like through the eyes of your Swedish equivalent. “Find Your Swede” is an initiative by VisitSweden, to show a different side of the country.

The personality test consisted of 38 questions and wasn’t supposed to take more than 10 minutes. It determines a “Swede that’s just like you” and allows you to add that person to your home screen. Doing so would create a private feed with your match where, in theory, you can “see each other’s Instagram photos, chat and get to know more about each other’s lives.”

I already had a great icebreaker (because Sweden is cold, heh) ready for when I met my match: “Do you find the Swedish Chef muppet offensive, or does he speak English gibberish in your version?” I granted the site access to my Instagram account and began the questionnaire.

With that data supplied, it only took a few seconds for Find Your Swede to find my Swede. Her Instagram handle was theburningberta. 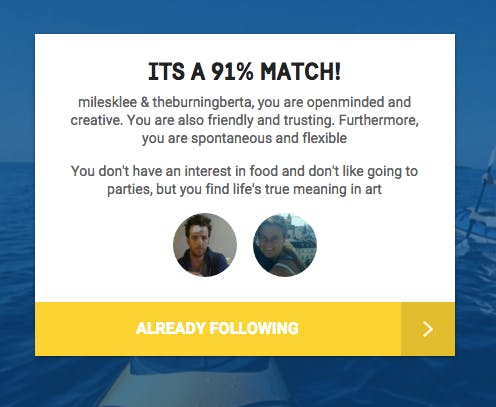 If this were a dating site, 91 percent compatibility would be something to get excited about, no? I quickly tabbed over to the theburningberta’s Instagram account to find out everything I could about my new Scandinavian buddy… only to find that her feed was private.

Well, nothing to worry about there; my account is private, too! It was clear we had a lot in common beyond just an open-minded sense creativity or spontaneous flexibility. Besides, if Find Your Swede was right about theburningberta’s friendly and trusting nature, she was bound to approve my follow request. Indeed, it only took her a day to get around to it.

I won’t post her real name or any of her photos here, out of respect for theburningberta’s obvious interest in privacy. But she describes herself as a “Low Carb High Fat Biomedical Scientist” into “street art, street dance, music, travel, body art, and family.” She appears to be the mother of two boys and, from what I could tell, was on a tropical beach vacation.

Suddenly I wasn’t so sure that theburningberta and I were meant to connect. I’m no fitness buff or nutritional expert. I’m lukewarm on street dance and body art. And I have no plans to raise children. Still, I had to make an effort. I had to get to know theburningberta beyond her social media presence and figure out what we had to offer one another. 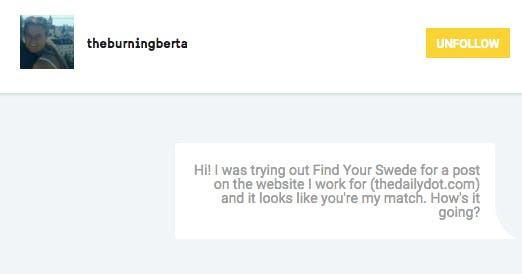 More than two weeks later, I’ve yet to hear back from theburningberta. Did I say something wrong? Come on too strong? Was she disappointed to be paired with an American (and a new media goon, at that)? Did she change her mind about the whole Find Your Swede program after realizing she has plenty of friends already? It seems as if I’ll never have the answers.

But wherever you are, and whatever your feelings, theburningberta, I’d like to say this: I hate Sweden now, and I am never visiting.

Photo via Always Shooting/Flickr (CC BY 2.0) | Remix by Jason Reed