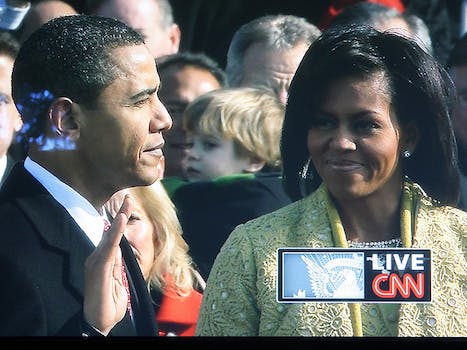 @Sweden’s Sonja on how US-Americans inaugurate a president

Sonja Abrahamsson, formerly known as @sweden, gives us a blow-by-blow narrative of what Obama's inauguration looked like from afar.

Sonja Abrahamsson is a blogger formerly known as @sweden and now as  @hejsonja. You can find her online at http://hejsonja.se.

I decided to watch Obama’s inauguration speech of 2013 as it was streamed and write down what I thought. Here goes:

As far as I know, there have not been hundreds of this kind of speeches in history. It has been like, what, 50+ of them? So I can sense that this is a special occasion. I can see there is a lot of people in the audience. It reminds me of when Jimi Hendrix preformed at Woodstock in 1969. This audience reminds me of hippies as well, but I guess that is because hippies are people, and all people are people, so it would be weird if people didn’t remind me of people.

They have put a red and blue staircase with white railings behind Obama. That is very clever, because that is a constant reminder of the colors of the flag. 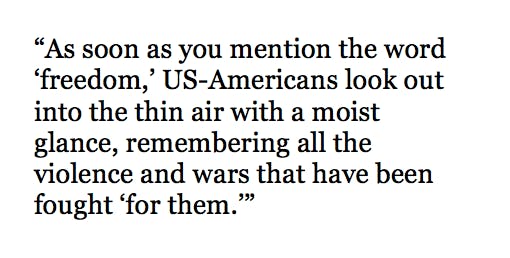 He starts off by talking about this thing the USA calls freedom. The word freedom seems to be like a hypnotic trigger among the US-citizens. As soon as you mention the word “freedom,” US-Americans looks out into the thin air with a moist glance, remembering all the violence and wars that have been fought “for them.” “They all got killed by a reason,” they say, “and that reason is the Constitution, the foundation on which our nation stands, and the reason why me and my children are free.”

What are they talking about?? “The land of the free?” I hear these phrases over and over again when it comes to this nation, and I guess that US-citizens hear it even more often. I don’t exactly know what freedom is either, but I’m pretty sure that as long as a country feels the urge to defend themselves against countries that are less powerful, and less free, they are not free.

And now Obama is talking about how to maintain freedom: use the individual freedom by working together, build roads, educate math and science teachers, and build research labs so they can save the environment on this planet. He’s also talking about the importance of equality among all men in this speech. All men. Yes. I think he is talking about all the men in the whole universe. And now he is telling us that war is over. Does that mean that peace has come, or does he mean that they still need to go to get guns to all the poor and suppressed people in other nations? I get confused. Oh! He’s embracing homosexuals! That was just about time.

I have watched the whole speech now. If I’m gonna make a summary, it will look like this:

Freedom. Our ancestors gave it to us, and we will proceed. In an up to date way. Equality. Take care of the poor. Build roads and educate science teachers. Solve environmental problems. Build more roads. We are free people, and we want everyone to be as free as us. We are powerful. Most powerful. Look at the flag. God bless America.

Plusses:
He sounded like a man that wants everyone to feel welcome to start a life as a US citizen. He was most welcoming.