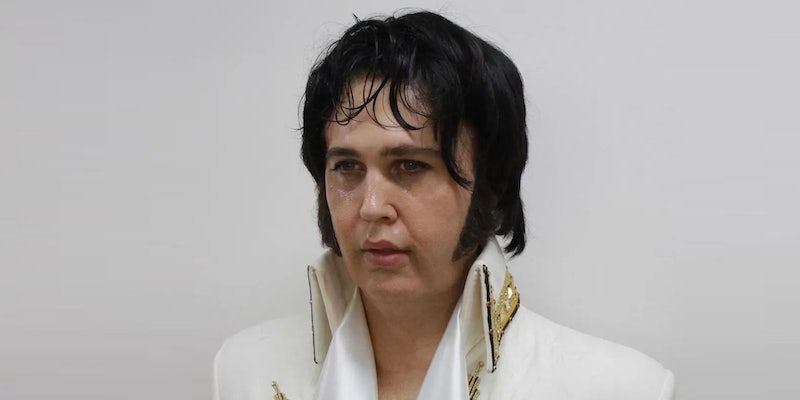 This extremely moist photo from the 'Elvis' biopic is... very relatable, apparently?

The marketing for Baz Luhrmann’s Elvis mostly focuses on the title character’s young-and-glamorous era. However, one very different photo is going viral this week. This unflattering pic shows Elvis star Austin Butler in middle-aged prosthetics, drenched in sweat while staring blankly into space.

As with many biopics, a lot of the buzz around Elvis focuses on the lead actor’s obsessive drive to embody an iconic historical figure. While Austin Butler’s appearance doesn’t change for much of the film, he spent months immersing himself in Elvis Presley’s physical mannerisms and vocal style, a process that culminated in him being hospitalized because (in Butler’s words) his “body was shutting down.”

When the time came to film scenes from Elvis’ later years, Butler donned padding and facial prosthetics, saying, “I was strapped into the jumpsuit and my lungs felt constricted. I could only take shallow breaths and it was very hot. It felt very claustrophobic, and I felt a great sadness because I’m sure Elvis felt the same way, that he could hardly breathe.”

Some of that claustrophobic vibe comes through in these photos, which probably explains why the Sweaty Elvis meme took off. The thousand-yard stare and the blank wall in the background combine to make Austin Butler look extraordinarily awkward and unwell—the polar opposite of his image in the Elvis trailers, and just weird enough to be perfect meme-fodder.