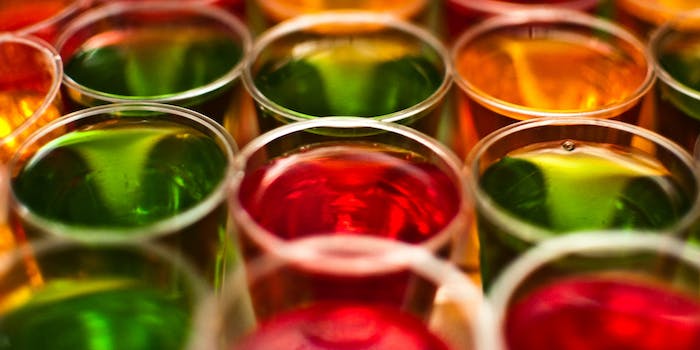 This is what #SurvivorPrivilege looks like on college campuses

I often consider myself lucky for getting through college without being raped.

My freshman year of college, I dressed up like a slutty school teacher for Halloween and headed to a frat party. Before we left, I took a few shots of something cheap and illegally obtained. By the time I got to the frat, I was sufficiently drunk, meaning that I didn’t have to rely on possibly roofied frat drinks. The dance party was in a basement packed with equally slutted-out Halloween costumes, and a frat boy danced his crotch into my butt eventually. We “danced” his hands on my hips until they weren’t on my hips. In what I assume was a drunken move, he clumsily jammed his hand down the top of my skirt and attempted to finger me.

Instinctually I ran away; the idea of sticky mystery man fingers in my cooch was so repulsive that I ran to the bathroom thinking I was going to be sick. Instead, I had a minor anxiety attack—until a friend who saw me run off came in, and we quickly bee-lined for the door and out of frat hell.

Much of college for me was attempting to balance having fun (which translated to drinking often) and the risk of getting raped. It seemed normal to me and my friends, but we had each other’s backs. We knew the “safe bars,” the guy friends we trusted and those we didn’t, the frats that were okay and the rapey ones. We knew to watch our drinks, to never go home alone, to carry that little pink canister of mace. I often consider myself lucky for getting through college without being raped.

Many of my friends weren’t so lucky despite all of our safety rules; they were raped while in college. All of my friends were raped under the influence of alcohol. All of them remember saying no. All of them eventually gave up the sometimes physical fights because rape seemed inevitable that night. None of them reported, to the police or to their campuses. Many are still dealing with the repercussions of being a survivor without ever having the right to say they were victims.

Recentl,y I was talking to a friend who is an RA in a primarily freshman dorm about a recent rape on her floor. The rapist was kicked out of the dorm, a relative success in the eyes of most RAs who struggle for months to see any action by administration. I asked her what the police were doing about it? When was the trial? How much time was he looking at? She just kind of looked at me sadly and told me that isn’t how this works.

I didn’t understand. I knew my friends had never reported to anyone including the police or the campus. But these rapes were reported to the university. Didn’t that mean some official police action would be taken? According to a Center for Disease Control survey, almost 20 percent of young women will experience sexual assault in college—don’t those kind of numbers demand some police action?

When I looked into it more, though, the answer was simple. Women need to press charges in order for the police to investigate, and many women don’t press charges because they fear the fallout any woman knows comes with rape accusations: slut shaming by friends, family and her university and re-victimization through legal proceedings, all just to lose the battle in the end.

It is not an irrational fear. According to RAINN, only 40 percent of rapes are reported. Of those 40 percent, only 20 percent are ever brought to trial and only 10 percent will ever be found guilty. Most victims go through the painful process of having to relive their trauma over and over, having every detail of what they drank, what they were wearing and what they said scrutinized for possible indications that the victim led their assailant on (aka that they “wanted it”), only to have the entire process end with the rapist walking away.

No wonder young women choose the less of two evils, choosing to report to their colleges so at least their perpetrators won’t be sharing a bathroom with them the morning before their chemistry exam. I want George Will to think about this the next time he tries to claim rape survivors have privilege. Young women have two options: file charges with the police with a 10 percent chance of being their rapist being found guilty or go to the university and attempt to salvage any remnants of safety in their homes. What a privilege.

Instead of George Will’s #survivorprivilege I got PTSD instead.

#survivorprivilege is when the next guy I dated took my caution as a personal insult and stopped seeing me.

#SurvivorPrivilege is not being able to function during high-stress times because stress causes every trigger to be more pronounced.

#SurvivorPrivilege is living 3 streets down from him, and being terrified of seeing him, even though I’m married now…

So now the burden of investigating and prosecuting rape cases lies on ill-equipped universities whose primary concern is often the image of the college and not the safety or well-being of survivors. Not shockingly, many schools have struggled to find a balance between encouraging reporting and then doing anything effective with that report.

And yet those schools who are encouraging reporting may not be handling these cases any better than those schools that encourage silence. The Department of Education recently released a list of 55 schools who receive federal funding, despite being investigated for their poor handling of sexual assault.

Clearly what we need is not more victim scapegoating (ala George Will) but some serious training on campuses to effectively try rapists as well as support victims.

But beyond better enforcement, what I think we all really want is to not rape or be raped. I don’t think most men go out and want to rape a woman, and I know women do not want to go out and worry about how to not be raped. But I don’t think we can change this by changing the definition of rape. It seems like the popular press is still consumed by what rape “really” is. Does it have to be force? If both people are drunk, can either party consent? Where is that “blurry” line?

Instead of trying to redefine or clarify rape, though, I think we would all be better served if we redefined what whttps://www.dailydot.com/tags/sex is. We should be defining sex as a fun, consensual experience between two engaged and eager participants, one that doesn’t have to be within the confines of a relationship. Sex doesn’t have to involve an official Facebook status, just fun, sexy respect. This is the conversation we need to start having on college campuses.

As a woman, I wish I was less confused about what I wanted. I wish I had been encouraged to explore and not be exploited. I wish mistakes happened less because I had all the information I needed. I wish I wasn’t so pigeonholed into a sexual role that it took me years to truly understand who I was and what I wanted. I wish we taught women that vocalizing what they wanted was good so that they could also vocalize what they didn’t want as well. I wish rape wasn’t inevitable in women’s lives but good, fulfilling, non-shaming sex was.

I wish the same were true for men. I wish they had more information about what was good sex, because good sex is consensual. I wish they were taught to listen to their partners so that they could never fear “accidently” raping someone. I wish we didn’t teach men that no meant yes and that liquor was an acceptable form of foreplay. I wish masculinity wasn’t so concerned with “scoring.” I wish they were taught to appreciate sex for more than something to brag about. I wish men could explore their sexuality with grace and open hearts without fear of someone questioning their manhood.

I teach freshmen now. Sometimes I try to talk to them about sex—what is good sex, what they like, and what they don’t. I had one student that was visibly uncomfortable every time sex was mentioned. She told me: “We all do it. We all know we do it. So why do we have to talk about it?”

We need to talk about sex because if we don’t, how can we consent to it?