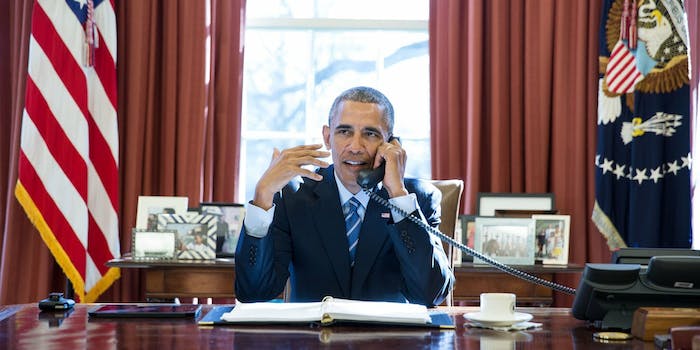 With his Supreme Court nominee, Obama chooses the path of least resistance

The battle has begun.

President Barack Obama announced his appointment to replace the late Justice Antonin Scalia on the Supreme Court on Wednesday. His choice is Merrick Garland, one of the most conservative judges ever chosen by a modern Democratic president.

The Internet doesn’t seem particularly impressed. Perhaps this is because Garland doesn’t have much in the way of a record when it comes to the typical divisive issues facing a Supreme Court nominee, like privacy, abortion, the death penalty, and affirmative action. As a judge in the U.S. Court of Appeals for the D.C. Circuit for the past 19 years, Garland mostly dealt with regulatory issues.

Frankly, the topic that’s getting the most attention is the man’s name. Literally. We can start with my personal favorite:

This may be the star of the show, but there are plenty of runners up. Some have offered commentary on how he would be just one more white guy on the court:

Others associated his unusual name with fixtures of popular culture:

merrick garland sounds like a minor character on nashville

Some just had fun with it:

Merrick Garland sounds like a brunch spot where eggs are $26

While these tweets are certainly creative and humorous, they obscure the important details surrounding Garland’s selection to the nation’s highest court.

For one thing, he is a choice that Republicans will have a difficult time opposing on his merits. Sen. Orrin Hatch, the longest serving Republican member of the Senate Judiciary Committee, told the conservative site Newsmax last week that he thought Garland was the judge Obama should pick.

“[Obama] could easily name Merrick Garland, who is a fine man,” the Utah Senator commented, adding that “he probably won’t do that because this appointment is about the election. So I’m pretty sure he’ll name someone the [liberal Democratic base] wants.”

If Obama had wanted to inspire his base or guarantee a liberal legacy on the bench, he would have gone in a much bolder direction.

Indeed, seven Republicans currently in the Senate voted to confirm Garland to the U.S. Court of Appeals to the D.C. Circuit in 1997—including Hatch, Dan Coats of Indiana, Thad Cochran of Mississippi, Susan Collins Maine, Jim Inhofe of Oklahoma, John McCain of Arizona, and Pat Roberts of Kansas. If nothing else, Garland is certainly a pick that the Republican Party will have a hard time opposing without seeming blatantly partisan.

At the same time, there isn’t much to recommend Garland beyond these practical considerations. His other noteworthy characteristics after all, are the fact that he’d be unusually old for a Supreme Court judge [63], which makes it less likely that he would have as many years on the bench as most judges. And he oversaw two high-profile terrorism cases, the Oklahoma City bombing and Ted Kaczynski, aka the Unabomber. This, along with Garland’s comparatively conservative record and bipartisan appeal, makes him the perfect candidate for twisting GOP arms. If Obama had wanted to inspire his base or guarantee a liberal legacy on the bench, he would have gone in a much bolder direction. Garland, by contrast, is aggressively uninspiring.

With the Republicans threatening to refuse to even hold a vote on Garland’s nomination until a new president is elected, Obama has clearly chosen the someone who might make it easier to reach across the aisle in the final months of his presidency.

My hunch is that this may bode ill for Garland’s prospects. On one hand, Obama isn’t wrong in assuming that the Senate Republicans will be in a tough spot trying to justify opposing a vote on Garland’s confirmation. Aside from a strongly liberal position on gun control (which has already received criticism from the right), Garland’s record mostly involves esoteric regulatory matters that rarely stir up strongly held emotions. While leaning to the left, his reputation is generally that of a meticulous researcher who tries to find consensus between his colleagues. In the words used by John Roberts during his confirmation hearing in 2005 to become chief justice of the Supreme Court, “Any time Judge Garland disagrees, you know you’re in a difficult area.”

Obama has clearly chosen the someone who might make it easier to reach across the aisle in the final months of his presidency.

Unfortunately, Garland’s blandness will make it difficult for the left to rally behind him with a force equal to that which can be anticipated by the Republicans who will oppose him. If Obama had gone with D.C. Circuit Judge Sri Srinivasan, he could have inspired progressives by appointing the first Indian-American and first Hindu judge to the bench; the same can be said of Attorney General Loretta Lynch, who would have been the first African-American woman to receive that honor. Similarly, Obama could have chosen a strong liberal voice like U.S. 9th Circuit Court of Appeals Judge Paul Watford, who has taken courageous stances on hot button issues like opposing lethal injections and defending illegal immigrants.

Instead, Obama seems to have opted for the path of least resistance.