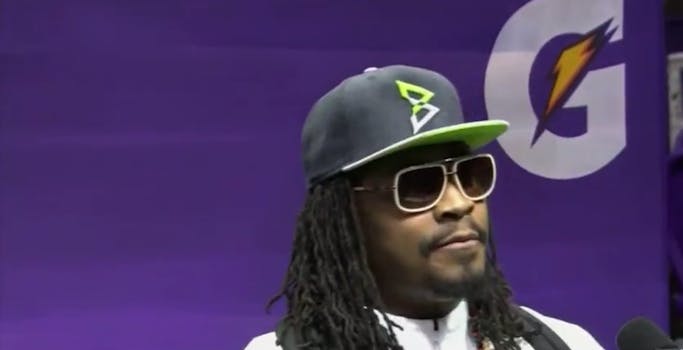 Phoenix’s US Airways Center hasn’t seen this much action since Barkley and Jordan squared off in the 1992-93 NBA Finals.

The NFL Media Day, generally the Tuesday prior to the Super Bowl, is a crapshoot that can range from a total snoozefest to a highlight reel worthy of an NFL Films classic or 30 for 30 documentary. Luckily, the usual navel-gazing in downtown Phoenix (high of 75 degrees) prior to Super Bowl XLIX had some moments that were too precious, narcissistic, funny, and just plain weird.

In order to accommodate media sorts, who are more likely staying in Scottsdale, Ariz., or downtown Phoenix rather than lodging-challenged Glendale, Ariz., the NFL took over the home of the Phoenix Suns Tuesday where the New England Patriots and Seattle Seahawks took turns glad-handing, pontificating, taking selfies, and just plain trying to get out alive in time for happy hour. And now, for the highlights.

First, Marshawn Lynch speaks. Or does he? He sure knows how to rock those headphones.

@Seahawks talk at 12:15pm during #SB49 media day. Will we hear much from @MoneyLynch? http://t.co/kZjBM7FVjQ pic.twitter.com/wbr1l0lH90

Hall of Famer Warren Sapp shows off some pants he put on in the dark.

Ricardo Lockette gets a free haircut.

Gronk reading "A Gronking to Remember" is WHY WE HAVE MEDIA DAY    http://t.co/f9tdLnRj2O https://t.co/DJV4i0n4BA

In a Super Bowl halftime preview, Gronk belts out a Katy Perry tune.

Jerod Mayo’s daughter, Chya, is the real star of the day

Shameless plug for the hometown mascot. Too bad he can’t play quarterback.

"Hey Tom, your podium is over there." – Big Red#SBMediaDay pic.twitter.com/7WOJrL4XYT

Kam Chancellor with a glare that commands fear on the field, respect off.

"I’m going to bring my sunblock, my shades and a hat…and I’m going to Revis Island”- Doug Baldwin #SBMediaDay pic.twitter.com/wBdOk5iFSk

Kickers get their due—Steven Hauschka interviewed away from the maddening crowd.

The Pats curiously make their way into the arena. I think the basketball hoops threw them

Coach Bill Belichick takes on the media in his flip-flops.

.@DangeRussWilson: “I wish everybody would stop fining my man Marshawn" #SBMediaDay pic.twitter.com/9xSuzQalkt

But Julian Edelman’s is best

Julian Edelman may have taken the best selfie of #SBMediaDay: http://t.co/sdsBTyRNAY

As a beautiful Phoenix sunset looms, reporters of all manner of media head off to file their stories, and the players move on to luxurious sponsor dinners, us mere mortals who have to live vicariously through livestreams and social quips begin the countdown to Sunday’s kickoff.