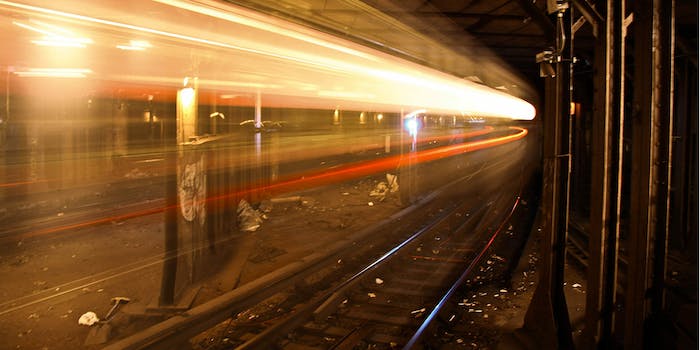 Some New Yorkers were briefly terrified on Monday when they thought they were about to witness a man being run down by a speeding subway in Chinatown.

The man was apparently smoking on the tracks when the B train came hurtling into the Grand Street station. Shon Mogharabi, a man who witnessed the incident, tried to pull the smoker to safety, but the man instead disappeared under the platform.

“Right before the train hit him, he ducked under the platform,” Mogharabi, 31, told the New York Post. “Everyone turned away, thinking he was dead. It was terrible.”

But this isn’t a subway story that ends in tragedy.

“Then he waved his hand from between the train and the platform, and we were all shocked,” Mogharabi said.

A video on Mogharabi’s Twitter shows the man walking along the tracks next to a stopped train.

Been living in NYC way too long. Saw a guy on the tracks this AM, with the B train speeding ahead. Tried to pull him out and he ducked under the tracks. He’s all good, he was just enjoying a morning cig under the train. pic.twitter.com/SV20vtj6go

Apparently, this isn’t a totally uncommon move in NYC. The video shows the man taking some time to throw trash at the train, and then strolling along like it’s no big deal.

In fact, he strolls right past the firefighters who had been called to the scene. When one of them turns around to confront him, he briefly humps the train and dances a little jig. The firefighters are unfazed; it’s just another day in the Big Apple.

People on Twitter seem to have embraced the man as a new folk hero or, at the very least, an entertaining dude. New York magazine even declared him the city’s new mayor.

he leading us to the portal to Narnia pic.twitter.com/72OmeETkrc

Police say the man was intoxicated, and they took him to Bellevue Hospital. He has not been arrested on any charges.