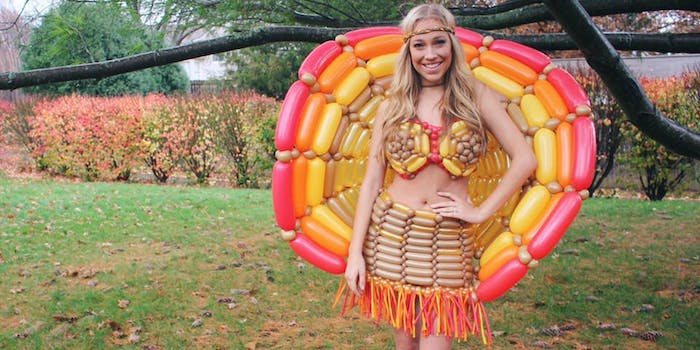 This subreddit showcases women for being awesome—not just hot

When you're attracted to women, feminism can be a complicated thing.

Being a feminist, while also being attracted to females, can be a complicated matter. On the one hand, you believe that a woman’s looks shouldn’t influence how she’s viewed as a human being. Unfortunately, as humans, we have stupid brains, and they’re connected to stupid eyes. We may believe in noble things—but we’re still tragically stupid.

Don’t let that cognitive dissonance get you down, though. If you’re a feminist who also likes looking at attractive females, there’s a support group for you: r/UNBGBBIIVCHIDCTIICBG.

Or: Upvoted Not Because Girl, But Because It Is Very Cool—However, I Do Concede That I Initially Clicked Because Girl.

It’s a subreddit that currently has over 90,000 subscribers. By the time you read this, that number may have cleared the 100,000 mark—it’s growing fast, and for good reason: There are a lot of people who have clicked on thumbnails because of the attractive women in them, only to actually discover something really cool. Like this:

Kids, remember to use condoms.

If you have a burning itch to click on extremely stupid links—the kind you just know will be extremely stupid, bookmark r/UNBGBBIIVCHIDCTIICBG (or r/UNBG—fewer letters, easier to remember, and it’s just a redirect to the original sub). Visiting the sub on the reg will decrease your risk of downloading malware from that “One Neat Trick to Lose Ten Pounds” ad, which you only clicked for the stock photo of a woman in a bikini. Besides, even if you didn’t get malware, you’d still feel stupid for directing traffic to a spam site that sells a dietary supplement harmful to at least two of your vital organs.

Instead, you could be clicking on thumbnails of attractive women, and finding yourself in awe by what the people in those links are doing—dancing, rock climbing, running obstacle courses, or unicycling—and you might even forget, entirely, that attractive women are doing those things. You’ll feel a little less hypocritical, and a little more like a decent person.

With enough time spent on this sub, you might start seeing seeing attractive women in public and thinking, “I wonder if she ice skates? Or maybe she’s awesome at making costumes out of balloons?” And you’ll no doubt feel better for thinking more than just, say, “Those boobs are an 8.5.”