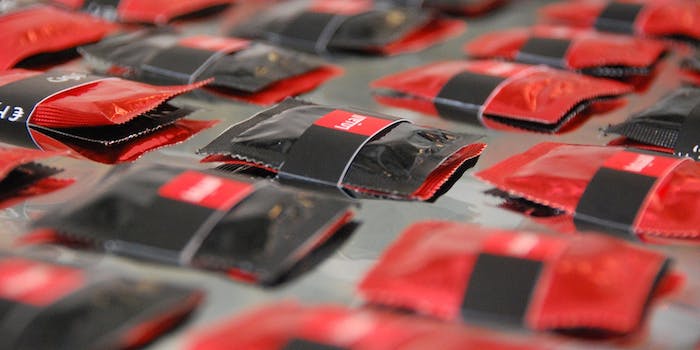 A fully-funded Kickstarter project promises to provide you with an “elegant accessory” that you can carry your condoms in.

If you’ve ever suffered the indignity of trying to get something out of your purse and having a condom awkwardly fall out, you’ll be glad to know that a fully-funded Kickstarter project promises to provide you with an “elegant accessory” that you can carry your condoms in.

Although the creator of the Plan A Case acknowledges that stigma about carrying condoms is a thing (and not a thing she wants to support) and has included a clear case for those who’d rather not hide them away, the whole product is predicated on the notion that there’s demand out there for stylish leather pouches that make carrying condoms a little more cool. And that’s sad. Not because this idea is bad or anti-feminist or anything, but because we still see condoms as something that requires a special cute carrying case.

In a Jezebel article about the Plan A Case, Kelly Faircloth writes, “There’s nothing wrong with the idea, exactly, and even the most sex-positive gal probably doesn’t want a bunch of condoms spilling out of her bag every time she goes to get Chapstick.”

Maybe not, but one way we’ll know that the sex-positive war has been won is when having condoms fall out of your bag is no different than having breath mints or ibuprofen fall out of your bag. They’re all things we need sometimes to keep our bodies feeling and working the way we’d like. No big deal.

While I won’t say that the Plan A Case is singlehandedly holding back that war effort, I wouldn’t say that it’s helping, either.

It’s also interesting that all these “stylish” condom-related products are marketed at women, not men. Men comprise the majority of people who need to use condoms themselves, and yet women are often expected to be the ones to buy and provide them during heterosexual hookups. The majority of other contraceptive options are already women’s responsibility: IUDs, hormonal methods, sponges (does anyone even still use those?), tubal ligation.

Why aren’t there more “elegant” new products that aim to encourage men to purchase and use condoms? Men have just as much of an incentive to avoid causing pregnancy or getting STIs as women do. Their pants, unlike most women’s pants, have these really convenient things called “pockets” in which condoms can be carried discreetly. If they have a particular preference for condom brand or size, they can be sure to always have it on-hand. Why not?

Of course, the biggest objections to using condoms come from folks with penises, not women who find the current condom storage options insufficiently classy. Unfortunately, for many penis-havers, condoms do reduce sensation and can make it more difficult to orgasm. There are ways around this (lube, certain brands of condoms), but that doesn’t entirely solve the problem. Basically, you can either commit to getting tested regularly and only having sex with partners who are also getting tested regularly, or you can deal with the imperfection of condoms.

There’s a reason, after all, that the Bill & Melinda Gates Foundation offered a $100,000 grant to anyone who could invent a more pleasurable condom.

Regardless, this means that women who hook up with men without using condoms are more likely to be skipping the condoms because of their partners’ objections than because they didn’t have a cute leather case to bring them in. This is a serious problem. In one study, a quarter of teen moms said that they didn’t use a condom when they got pregnant because the guy didn’t want to.

To be fair, teen girls who get pregnant also tend to have lots of other risk factors, and older women may feel more comfortable insisting on condom use or refusing to have sex if a male partner won’t use a condom. (It’s also important to avoid fearmongering and to note that safer sex practices among teens have generally been on the rise despite the best efforts of Republican politicians.)

Finally, we need less stigma about condoms and sex in general. Well-intentioned as Plan A Cases (with their transparent option) are, you can’t destigmatize something by hiding it.

Photo via Paul Keller/Flickr (CC BY 2.0)