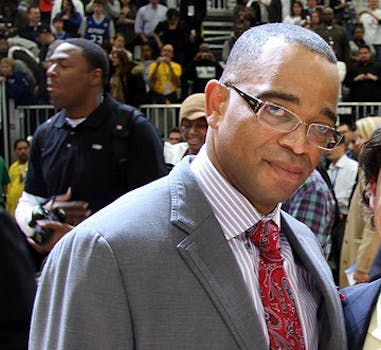 Athletes and media showered love on longtime ESPN anchor Scott after he announced on Twitter that his appendiceal cancer had gone into remission.

Longtime ESPN anchor Stuart Scott has announced on Twitter that he has cancer again.

Scott, 47, was first diagnosed with appendiceal cancer in November 2007 after undergoing an emergency appendectomy. Since then the cancer has gone into remission about two times.

“Blessed by prayers..I’m back in the Fight. C reared its head again. Chemo evry 2 wks but I’ll still work, still work out..still #LIVESTRONG,” Scott tweeted to his 266,000 followers. “Thanks for prayers..ill fight w ALL C survivors & loved ones. Cancer wants to re-appear..picked the right guy cuz I HIT HARD all day long!!”

Scott joined ESPN in 1993 as the host of the network’s Sports Night program. He is currently a SportsCenter anchor known for his catchphrases “Boo-yah!,” “Like gravy on a biscuit, it’s all good!,” and “Don’t hate the playa, hate the game.“

Scott will “continue to work the best he can around his treatments,” ESPN spokesman Mike Soltys told USA Today in a statement.

“u have inspired so many with your courageous fight – KEEP FIGHTING – HAVE FAITH -GOD BLESS!” longtime basketball reporter Dick Vitale tweeted.

“Thinking about you @stuartscott and how you once again will win this battle my friend,” ESPN anchor Linda Cohn tweeted. “Your strength cannot be taken away!”

“u and the family definitely in my prayers and just know that you’re not fighting alone!!!” Los Angeles Clippers point guard Chris Paul tweeted. “Much love!”