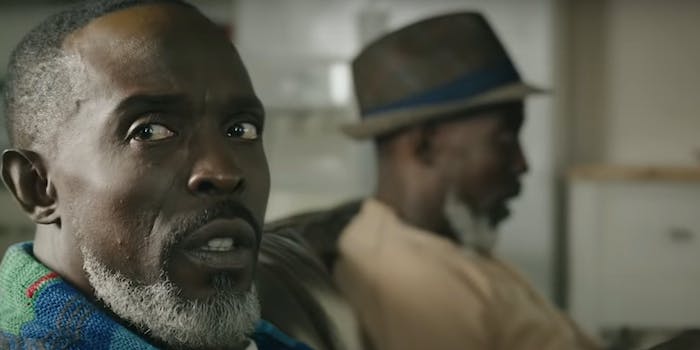 This week in streaming: The iconic roles of Michael K. Williams

Plus: Reviewing 'Shang-Chi' and unpacking the Jessica Chastain and Oscar Isaac video.

I think The Wire was the first show I ever binged. This was probably before we were even saying “binge-watched”; I’m pretty sure I saw it on DVD. But I definitely remember Michael K. Williams’ Omar Little was the character I always waited for.

Williams, who was found dead on Monday, leaves behind much more than just The Wire, though it is certainly the role that introduced many people to him. HBO’s Boardwalk Empire, Lovecraft Country, and The Night Of, as well as Netflix’s When They See Us showed what a range of characters he was capable of playing. (And all these titles are available via streaming.)

In a 2018 video for an Atlantic/HBO collaboration, which recirculated in the wake of the news, Williams ponders the roles he’s played and whether he was typecast. It’s a powerful watch, even more so now, and it speaks to the empathy and humanity he gave his characters and roles. Omar has one of the most memorable introductions in TV history.

It’s hard to put into words what his loss means, so here’s The Wire co-star Wendell Pierce saying everything that needs to be said.

No matter whose turn it is to control the remote, Peacock is sure to please the whole family. From the world of WWE wrestling, to sitcoms like The Office and AP Bio, to incredible movies from the Universal library, it’s packed with content.

Peacock even goes beyond what you’ve come to expect from other services. There’s live sports, live news, and more. There’s too much to talk about here, so keep reading to learn everything that makes Peacock great.

Shang-Chi is an exciting, action-packed entry in the MCU

Origin stories can be something of a slog, even in the Marvel Cinematic Universe. Many of them tend to hit the same beats even if the heart of their stories couldn’t be any more different from each other, so it takes a lot to make them stand out; they’re also often tasked with exposition dumps left and right.

With none other than legendary actor Tony Leung in its pocket, an enticing family drama at its core, and some great fight sequences, Shang-Chi and the Legend of the Ten Rings soars past those (admittedly low) bars, giving us one of the MCU’s better origin movies even as it runs into a few familiar roadblocks.

The history behind Marvel’s Shang-Chi, who was created by Steve Englehart and Jim Starlin in the early 1970s, is, to put it lightly, complicated. In bringing Marvel’s first Asian superhero to the big screen, Shang-Chi tries to remix, course-correct, and reshape parts of that legacy. Shang-Chi’s father in the comics was a racist caricature, but the MCU creates a new character who carries the Mandarin moniker. In a conversation about the importance of names (and an attempt by Marvel to rectify its own past missteps), there’s a reference to Iron Man 3’s Trevor Slattery (Ben Kingsley), an actor who was hired to play the Mandarin, alongside a bit of commentary on cultural appropriation.

The all-star cast truly carries the film, even in some of its clunkier moments. Leung, who already found success for decades in Hong Kong cinema, knows just how to showcase with little more than his eyes. Simu Liu, who many viewers will know from beloved Canadian sitcom Kim’s Convenience, brings a relatable empathy. And while Awkwafina is reliable as the comic relief, it’s Meng’er Zhang who steals the show portraying a character who’s just as worthy of wielding the Ten Rings as Shang-Chi.

Shang-Chi and the Legend of the Ten Rings is now playing in theaters.

A clip of Oscar Isaac and Jessica Chastain on the red carpet took Film Twitter by storm this past weekend, prompting a discussion about sexual chemistry in modern cinema.

Chastain and Isaac were at the Venice Film Festival, promoting their new HBO miniseries Scenes from a Marriage, which premieres Sept. 12. Reuniting after their critically-acclaimed collaboration in 2014’s A Most Violent Year, they’re playing (as you can probably infer from the title) another married couple. And while the series doesn’t look notably sexy, Chastain and Isaac definitely display a certain vibe. In this 52-second clip, we see Oscar Isaac give Jessica Chastain a smoldering look before kissing her arm, with the two actors embracing each other and laughing for the cameras.

That Chastain/Isaac clip illustrates the way Hollywood fails to utilize sexual charisma—particularly in the case of Oscar Isaac, whose capacity for red-hot smoldering is typically kept under wraps. This reaction definitely folds back into the “people have forgotten what sexual chemistry looks like” thing, because Jessica Chastain and Oscar Isaac… are actors! They’re promoting a project together! Something similar happened a couple of years ago with Bradley Cooper and Lady Gaga, who played up their romantic vibes while promoting A Star Is Born. The chemistry was real, but it was also a central element of the film’s marketing campaign.

Now Playing: “See You Again” by Tyler, the Creator