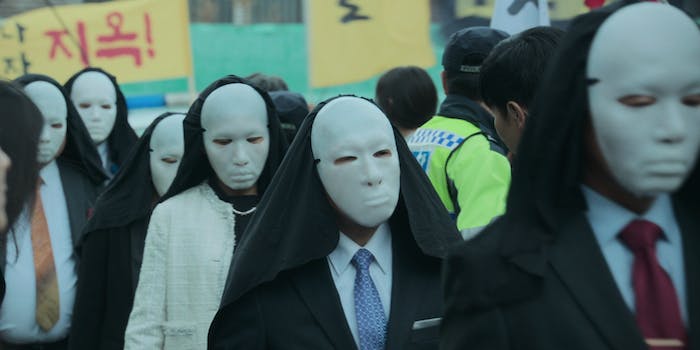 This week in streaming: ‘Hellbound’ has big demon energy

Plus: A 'House of Gucci' review and 'How to With John Wilson' returns.

Welcome to the Wednesday edition of the Internet Insider, where we tell you what you should be watching this week.

When How to With John Wilson debuted in October 2020, it was something of a sleeper hit. At the end of an impossibly tragic and bleak year, Wilson’s soothing voiceover and humanistic approach were a needed distraction.

The season 1 finale captured the early days of COVID in New York City, which seems surreal now. As we see at the beginning of season 2, things have been complicated: Wilson is now a landlord.

Wilson also gets deeper into his own life in season 2, showing his unbelievable connection to a now-imprisoned cult leader via his college a cappella group or pulling up his random appearances on a long-running court series. He has footage of it all, of course. And yet, Wilson narrates the show with “you,” as if he’s talking to some past self.

This season, both Conner O’Malley and Susan Orlean joined the writing staff, a majestic feat that comes across in flow of the show. That flow is a big part of why it is so engaging: Wilson often starts out intending to show us how to do the thing in the episode’s title (“How to Throw Out Your Batteries,” “How to Remember Your Dreams”), only to be pulled into another line of questioning after meeting someone tangentially related. (See: The surprisingly emotional Avatar support group segment.)

Wilson is immensely skilled at finding new kinds of Guys while capturing the absurdity and vulnerability of humanity.

How to With John Wilson season 2 is now streaming on HBO Max.

Come to the table for the ultimate Cowboys Fan Giveaway

Hey, Cowboys fans! Here’s your chance to win the ultimate Cowboys fan experience at the AT&T Stadium with the Cowboys x PECOS Giveaway. One lucky winner will receive a cash prize, a PECOS outdoor table, and TWO tickets to the Dallas Cowboys vs Arizona Cardinals game on Jan. 2, 2022.

With only a name and email address, you may get the chance to witness one of the biggest matchups of the season inside the AT&T Stadium!

There are at least two different movies tucked away in House of Gucci, Ridley Scott’s extravagant and expansive delve inside the waning years of a fashion dynasty and the relationships that influenced it.

With a runtime of just over 2 1/2 hours and spanning around 20 years, it loops in a rom-com meet-cute, a bombastic family melodrama, a biting satire directed right toward the wealth and exuberance it’s depicting, and some metaphorical and familial backstabbing that would fit right into the world of Succession.

Given the sprawling nature of the story House of Gucci is trying to tell, you could make an argument that it would’ve made an addictive TV event in the golden age of the prestige limited series.

On paper, House of Gucci had it all: Director Ridley Scott (with his second movie in as many months arriving in theaters), a litany of stars, a juicy tale full of family betrayal, and a story that evoked jealousy, greed, and a violent end. The reality, like much of House of Gucci itself, is a lot messier.

Netflix’s Hellbound is a brilliant new thriller about religious extremism

The cartoonish quality of Hellbound’s demons is a feature, not a bug. Netflix’s new hit miniseries offers up a fantastical premise, and proceeds to take it very seriously: What if demons appeared on Earth and dragged sinners to Hell?

In practice, this process looks absurdly schlocky. First, a disembodied head materializes and tells someone that they’re “bound for hell.” Then at the allotted time, a trio of muscular CGI monsters beat this person to a pulp and incinerate the body. It’s divine punishment by way of the Incredible Hulk.

Some viewers find this introduction off-putting, but there are plenty of reasons why Hellbound became a knockout hit last week, finally dethroning Squid Game as Netflix’s most-watched series. With a keen eye for the irrational side of human nature, it explores why people turn to reactionary beliefs in the face of disaster.