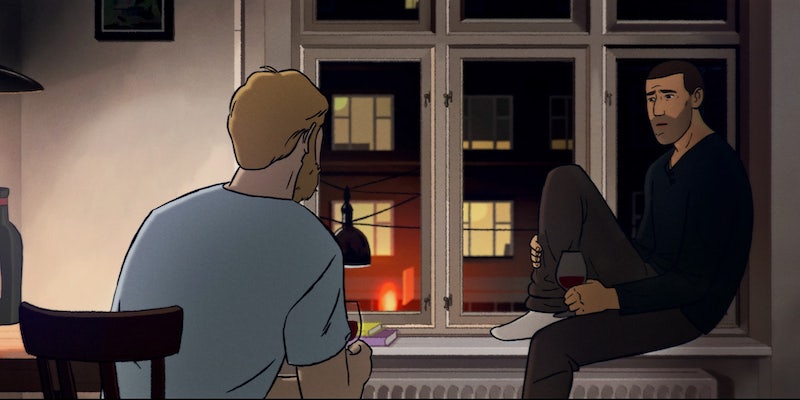 This week in streaming: A Q&A with the director of ‘Flee’

Plus: A review of 'A Castle for Christmas.'

Welcome to the Wednesday edition of the Internet Insider, where we tell you what you should be watching this week.

‘Flee’s director on bringing his friend’s story to life

Flee, the latest documentary by Danish director Jonas Poher Rasmussen, is an extraordinary film. Centered on Rasmussen’s friend Amin (a pseudonym) as he’s about to make several life changes, Flee is a clear-eyed view into a refugee’s story about how he fled Afghanistan as a boy and the sacrifices his family made in the years it took Amin to arrive in Denmark.

It’s also Amin’s journey of self-acceptance as a gay man and his struggles to find a sense of home decades after living through the trauma of being displaced. The film’s animation allowed Rasmussen and his team to visualize parts of Amin’s story in which no footage exists and protect Amin’s identity. The story highlights the casual cruelty that refugees faced on a daily basis as well as some of the lighter moments that occurred during that time.

I sat down with Rasmussen a couple of months ago to learn more about what went into bringing Amin’s story to life, voice casting an animated documentary, and the limitless ceiling of animation. Flee is now out in limited release.

This interview has been edited for length and clarity.

Daily Dot: You’ve already mentioned some of the practical reasons for telling Amin’s story in animation in previous interviews. What else about the medium appealed to you?

Jonas Poher Rasmussen: I always loved animation, and animation, to me, is kind of magical and everything is possible. If you wanted to go to the moon, you could do that. It’s really a story about memory and trauma as well that we thought animation could be more expressive. Somehow, it felt more honest because it is Amir thinking back and I would never be able to recreate exactly what happened. Because we could be more expressive, it felt more honest somehow.

What kind of challenges, technically speaking, did you come across when making Flee that you didn’t expect?

It was quite a steep learning curve because I’d never done animation before. So in the beginning, we did some first tests and then I was like, ‘But can we change this?’ They’re like, ‘No. We’re done with the animation, so it’s too late now.’ You need to be really, really precise on what you want and how it should look like from the very beginning.

It’s somewhat opposite of the process of doing live-action documentary and fiction because normally, you shoot and then you go into the editing room and then you kind of become a slave of the material you brought home.

In regards to the present-day scenes, how much were you able to set up and capture that? Were those scenes photorealistic?

We used real footage as a reference for the visual style but also for how there’s a difference in how we treat the camera when Amir is talking about his past and in these present-day scenes where it’s more kind of me behind the camera. There are jump-cuts and all of these things in the present-day sequences. And that was very deliberate because we wanted it to feel authentic.

You get a sense of that with the very beginning of Flee when you’re trying to frame and set up the first interview with Amin, which you see in a lot of other documentaries. And it lets people know that Flee is a documentary if they went in without that knowledge.

We wanted that from the very beginning because it was important that people understood that Amin is a real person behind the animation.

The Q&A continues below.

Bring the power of real estate investing to the 99%

One asset that builds generational wealth is real estate, but that privilege is usually reserved for a select few—until now. reAlpha uses disruptive technology to level the playing field and unravel the high barriers of entry into real estate investing.

Considered the Robinhood of Airbnb, reAlpha gives ordinary people the ability to gain fractional ownership in short-term rental properties and earn passive income. They even do free stays at your property holdings. (It’s like a timeshare, only not terrible in every way.) Learn how to become a shareholder of reAlpha today!

Animated documentaries aren’t completely unheard of; Waltz with Bashir is a famous one in the genre. Were there any documentaries or films you looked toward to help you tell this story responsibly?

Waltz with Bashir is the big kind of crowned jewel in animated documentary, and I, of course, looked at that one. That also deals with trauma somewhat the same way as Flee does. Of course, Persepolis is a documentary as well, but that’s more a cartoon, and it’s acted out.

But there are these Swedish short films. One’s called Hidden and is about these legal immigrants in Sweden who hide themselves, and it’s just this kid talking about all these things he can’t do. So I could see there that you could use animation to create anonymity.

But otherwise, for the visual style of the film, it was really actually looking more toward different visual artists: Edward Hopper, Ricky Metzger. We had a bunch of short-animated films as reference for the more graphical sequences in the film.

Amin’s story in Flee covers several decades and features dozens of speaking parts, including Amin at several different ages. How do you go about casting something like this?

It was difficult because we don’t have a lot of Afghan actors in Denmark who speak both Danish and Dari. So it was really about going into the Afghan communities in Denmark and finding people who would be willing to act. A lot of these people had similar stories to Amir’s and really felt a commitment to tell the story.

Because it’s a documentary, I actually think it was helpful that there weren’t schooled actors, that they kind of used their own experiences and their own voice in the film.

When Flee first premiered at Sundance, it connected with audiences, and in the months since, it’s resonated even more. What do you hope changes about how we talk about refugees or how the refugee crisis is covered?

I really hope that this film will give a human face on refugees because there are more than 80 million people who are refugees right now. Hopefully, people will see—this is not a mass of 80 million people; it’s 80 million individuals who all have different stories.

How did you balance the different tones—it’s a refugee story but it’s also about Amin’s journey toward self-acceptance as a gay man—throughout the film?

I think [the different tones] very much come from the friendship side of it because the way we talk to each other, there’s a certain tone. Of course, we’re serious, but we’re also friends, and we can be silly. But also because he was fleeing for five years, and it was not all horrible, you know? He also had tender moments with his family; he also fell in love with a young guy in the back of a truck. He had a feeling of security pushing forward. I think these things that make us relate to a person. I think there’s something about when you’re with a character in a film: If you have a moment where you can laugh with them, it kind of opens everything up because all of a sudden, you’re attached in another way.

A Castle for Christmas follows a formula that has become the model for streaming holiday movies. A successful woman in New York City (in this case, Brooke Shields, playing a successful novelist) travels to a smaller town (in this case, it’s a village in Scotland where her grandfather lived). The inhabitants teach her about community and embracing a slower lifestyle. They also teach her how to knit and yarn bomb—one of the best parts of the movie. Inevitably, she falls for the curmudgeonly owner of an old castle (The Princess Bride’s Cary Elwes), and the two of them engage in incredibly cute holiday activities.

Does it work? Sometimes. The big appeal of A Castle for Christmas is that it adds a castle to the tried-but-true holiday movie plot, popularized on the Hallmark Channel. A lot of the movie is very silly and unbelievable, like fans protesting because Shields’ novelist kills a fictional main character in her latest book. But it’s also a cozy movie, one that is best paired with a hot beverage and a blanket. The romance feels forced at times, and the character development is minimal. But the movie does feature maybe the most beautiful knit cardigan I have ever seen. Apparently, Shields had some experience knitting before she joined the movie and enjoyed that aspect of it. I’m choosing to see A Castle for Christmas as a knitting movie over a generic rom-com.

Now Playing: “Burning Down the House” by Talking Heads