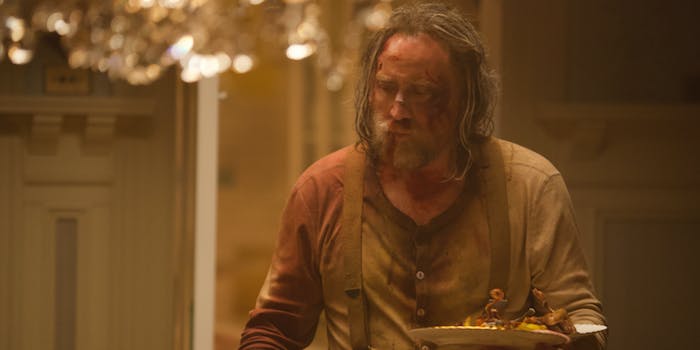 This week in streaming: The Emmys, Nicolas Cage’s ‘Pig’

Plus: 'Sex and the City' memes.

The Emmys feel out of step with how we watch TV

The 2021 Emmy nominations were announced Tuesday, and once again there were confounding nods (Emily in Paris, The Kominsky Method) alongside crowd favorites (Ted Lasso, Bridgerton). Quibi, a streaming platform that debuted last year and only lasted six months, somehow got eight nominations. Don Cheadle, who briefly appeared in The Falcon and the Winter Soldier, picked up a guest actor nom, to which he responded, “I don’t really get it either.”

That kind of sums up award show logic. In 2020, as they went virtual, there was a growing sense that these bloated events maybe don’t need to come back, at least not in their current form. In May, NBC canceled the 2022 Golden Globes so that the Hollywood Foreign Press Association could work on reforming and diversifying its membership.

The Emmys have to account for a year-plus of television, and there was a lot. But scrolling through the award categories, you wouldn’t know it. As critic Judy Berman writes: “For once, the main problem is not a pool of nominees who are #SoWhite or #SoMale. It’s that the very categories the Television Academy divides them into, and particularly the ones it chooses to highlight in the nominations announcement and subsequent Emmy telecast, are increasingly ill-equipped to showcase the best of TV as we watch it now.”

I won’t go through a whole list of shows that should have been nominated because honestly I don’t remember most of 2020. But the Emmys absolutely got it right by nominating Pen15 and I May Destroy You.

22 web hosting services that will support your site’s needs

After everything is said and done, how do you know what services don’t just talk the talk but walk the walk?

For starters, you’ll need to know what you’re looking for. Do you need email support? Want something that’s WordPress compatible? How about developer-friendly? Or are you pinching pennies for a package that’s as cheap as it gets?

Never one to turn down an unusual project, Nicolas Cage is an attention-grabbing choice of star for Michael Sarnoski’s debut feature, Pig. Once Cage’s name has gotten people in the door, they’re in for a treat. Riffing on the structure of John Wick-style revenge movies, this indie thriller is disarmingly sensitive, eschewing violence (well, mostly) in favor of lovingly filmed depictions of food and cooking.

Robin (Cage) is an aging hermit who lives in a rundown cabin in the Oregon woods. His only companion is his beloved pig who accompanies him on truffle-hunting expeditions. This provides Robin’s only source of income, via weekly visits from the smarmy young truffle-dealer Amir (Alex Wolff), the sort of person who probably takes business advice from finance bros on YouTube. These two men couldn’t be more different.

This uncomfortable arrangement might have continued indefinitely if not for a violent attack on Robin’s home. In the dead of night, someone attacks Robin and steals his pig, leaving him to wake up the next morning with a head wound. With Amir as his only viable contact, he sets off to hunt down the kidnappers. Who, exactly, would kidnap a truffle pig?

We got a look at the first Sex and the City revival photo, which was immediately photoshopped. Andrew McCarthy got in on the memes, reposting one that added in his Mannequin character.