Pride and Prejudice and Kitties

The Web is bursting with new ways of reading and writing. Publishing is changing—from what people want to read, to how they want to read it. The rise of the e-book, new media tools, and new communities of readers and writers are transforming the very way we tell stories. This series will feature excerpts from the work of digitally self- published authors, e-book authors, or from new books that look at Internet culture in order to give a taste of the new frontier of literature in the digital age. Have a work in progress you’d like to submit? Email [email protected] for consideration.

“Netherfield Park is marked at last.”

The news caused much romping at the Bennet household for, as every cat knows, a handsome young tom in possession of his own territory must be in want of a mate.

“What a fine thing it would be for any of our five kittens to catch a rich mouse—I mean spouse,” said Mrs. Bennet. “Really, Mr. Bennet, you must pay a call on Mr. Bingley immediately, before that scheming Lady Lucas pounces on him for her daughter Charlotte.” 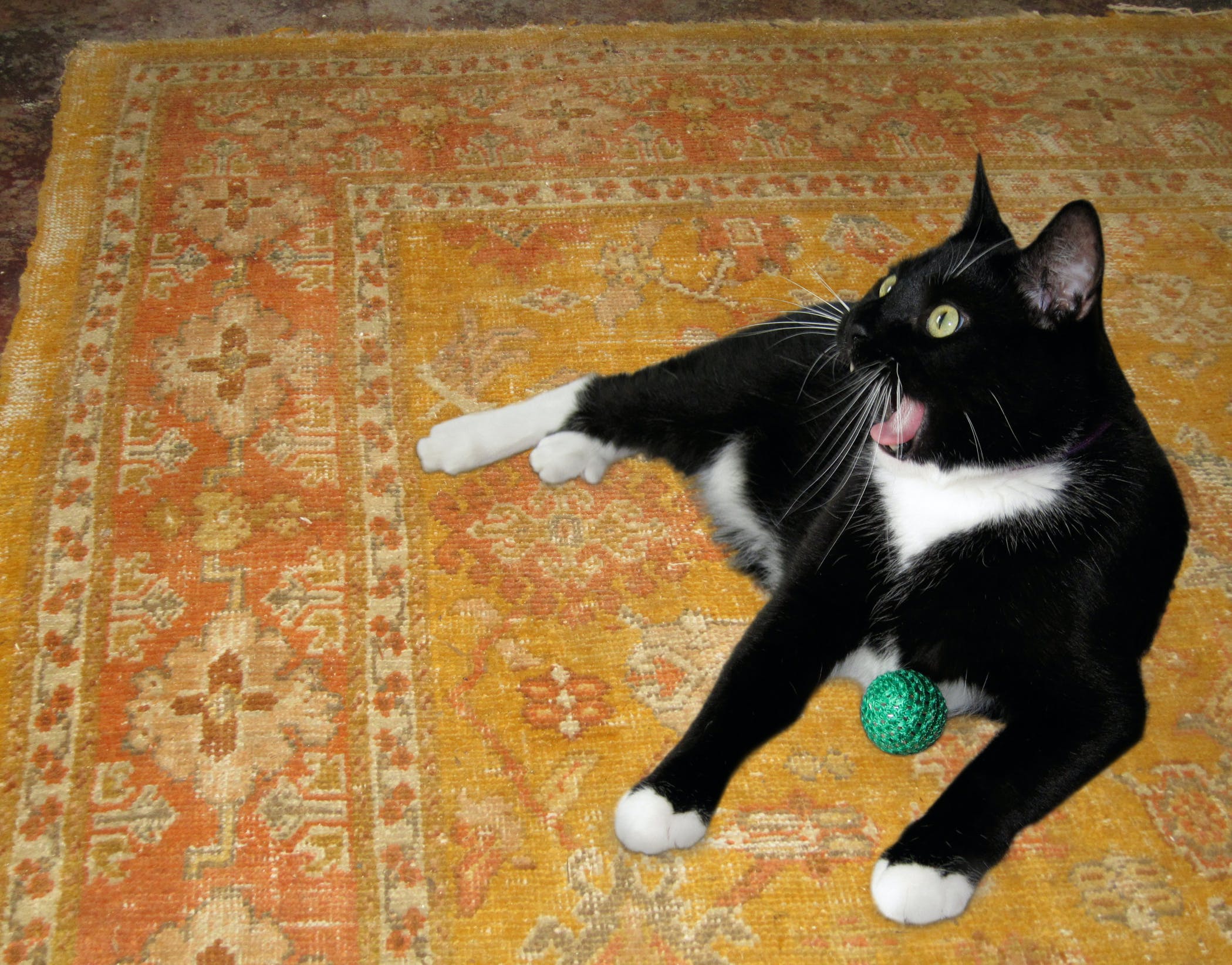 What a fine thing it would be for any of our five kittens to catch a rich mouse—I mean spouse.

Mr. Bennet, however, feigned indifference, yawning and proceeding to wash his face.

“I’ll tell you what, my dear,” said he, “why don’t you go yourself? I will send a few lines by you to assure Mr. Bingley of my hearty consent to his marrying whichever he chooses of our daughters; though I must throw in a good word for my little Lizzy.”

“I desire you will do no such thing. Lizzy is not a bit better than the others; I am sure she has neither Jane’s fluffiness nor Lydia’s animal spirits. But you are always giving her the preference.”

Mr. Bennet steadfastly refused to call on Mr. Bingley, and his wife’s mournful meows could be heard echoing through the halls of Longbourn. She was as nervous as a cat has a right to be about finding her kittens good mates. For, if she did not succeed in marrying her daughters off to rich toms, she would be thrown out to the hedgerows to catch her own supper when Mr. Bennet died.

Poor Mrs. Bennet was a cat of dim perceptions and horrifying hallucinations. The business of her life was to see her kitties well-mated; its solace was visiting and mews.

It is a truth universally acknowledged, that a single man in possession of a good fortune, must be in want of a wife.

However little known the feelings or views of such a man may be on his first entering a neighbourhood, this truth is so well fixed in the minds of the surrounding families, that he is considered the rightful property of some one or other of their daughters.

Observing his second daughter attacking a feathered bonnet, Mr. Bennet remarked, “I hope Mr. Bingley will like it, Lizzy.”

“We are not in a way to know what Mr. Bingley likes,” sniffed Mrs. Bennet, “since we are not to visit.”

“But you forget, Mama,” said Elizabeth, “that we shall frolic with him at the assemblies.”

At that moment, Kitty began coughing up a hairball. 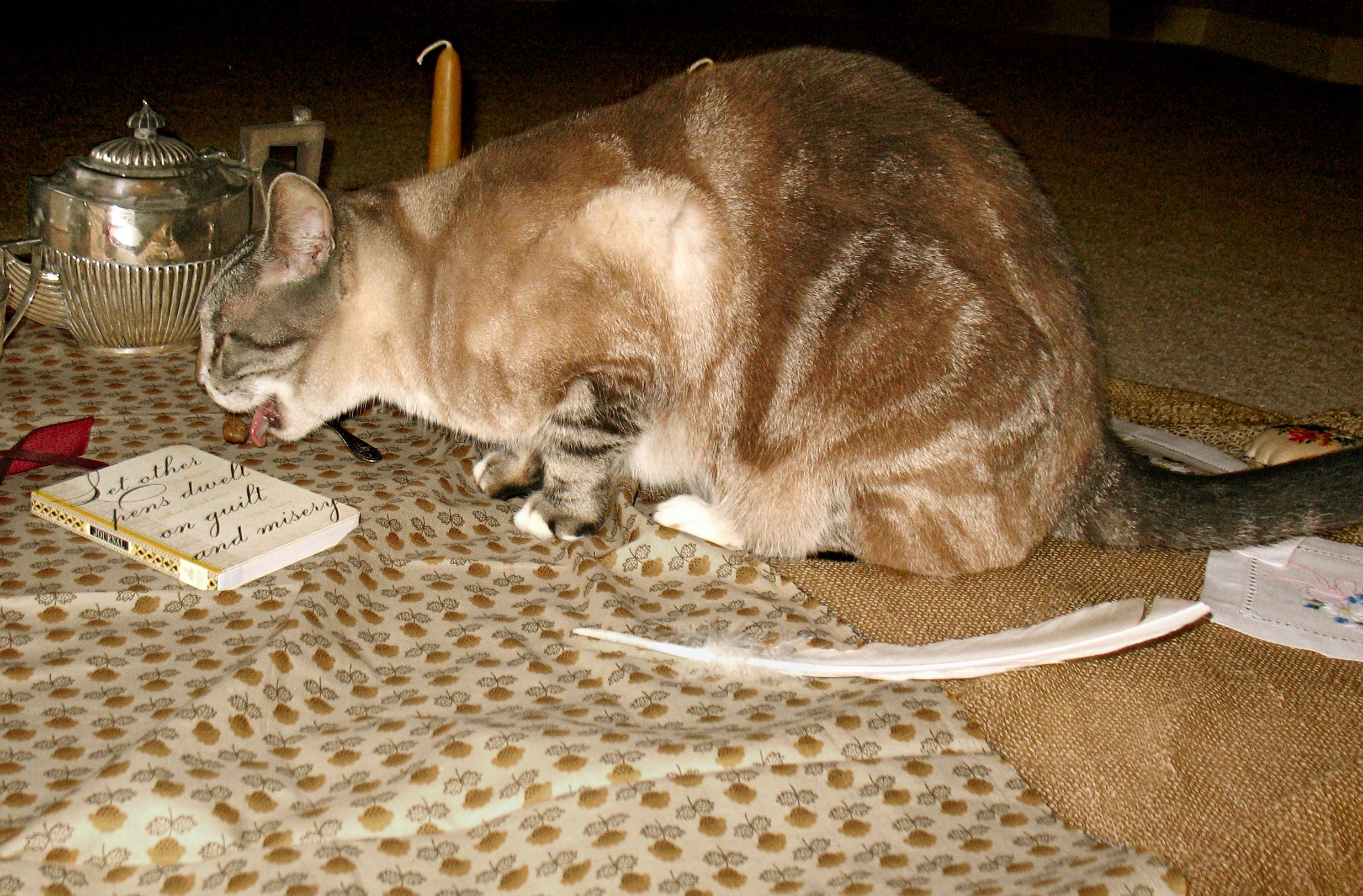 Kitty began coughing up a hairball.

“Not another hairball, Kitty, for heaven’s sake!” cried Mrs. Bennet. “Have a little compassion on my poor nerves!”

“Kitty has no discretion in her hairballs,” said her father. “She times them ill.”

“When is your next hair ball—I mean ball to be, Lizzy?”

Mr. Bennet suggested they return to the subject of Mr. Bingley.

But now poor Mrs. Bennet found herself coughing up a hairball. “I am sick of Mr. Bingley!” she gagged.

“I am sorry to hear that; but why did not you tell me before?” replied her husband. “If I had known as much this morning, I certainly would not have called on him. It is very unlucky; but as I have actually paid the visit, we cannot escape the acquaintance now.”

Upon hearing this, Mrs. Bennet frisked and frolicked with abandon; the irksome hairballs were entirely forgotten. Instead, her head was filled with visions of the coming assembly. There, in the ballroom, her daughters would meet the alluring Mr. Bingley and, if all went as planned, enjoy the pleasure of chasing the ball (Sir William Lucas had procured a particularly fine one with a bell inside) under the sideboard with him. These hopes and expectations raised Mrs. Bennet’s spirits to a pleasant pitch, for such sport with such a partner promised to answer all her dearest hopes for the happiness of at least one of her daughters, and the security of the entire family.

“What an excellent father you have, girls,” said she, when the door was shut. “I do not know how you will ever make him amends for his kindness; or me either for that matter. At our time of life it is not so pleasant, I can tell you, to be making new acquaintances every day; but for your sakes, we would do any thing. Lydia, my love, though you are the youngest, I dare say Mr. Bingley will dance with you at the next ball.”

Though he had visited Mr. Bingley, Mr. Bennet did not give his family the satisfaction of a description of their new neighbor. Was he long or short-haired, remote or cuddly? Did he sleep on or under the bed? The five Bennet sisters could only speculate on these fascinating questions. But their curiosity would soon be satisfied, for Mr. Bingley would be attending the assembly ball.

“If I can but see one of my kittens happily purring at Netherfield,” said Mrs. Bennet to her husband, “and all the others equally well-mated, I shall have nothing to yowl about.”

Mrs. Bennet invited Mr. Bingley to dine at Longbourn and planned a marvelous meal of mouse tails and spiced mole. But Mr. Bingley, drooling for a big-city rat, ambled off to London without warning. Mrs. Bennet was quite put out. Was he forever to be straying here and there instead of curling up contentedly at Netherfield?

When the evening of the ball came, Mr. Bingley arrived with his two sisters: Mrs. Hurst and Miss Caroline Bingley. Also accompanying him was his friend, Mr. Darcy, a handsome cat with an equally handsome fortune of 10,000 mice a year and an extra six lives into the bargain.

“What a catch for our girls!” chirped Mrs. Bennet.

As it turned out, Mr. Darcy was a proud, disdainful cat who looked down on country kitties and growled when Mr. Bingley suggested he ask Elizabeth to prance! Fortunately, Mr. Bingley was more accommodating, for he delighted in the company of country cats and romped spiritedly around the room with Jane. After supper, all the cats, with the exception of the proud Mr. Darcy, played with a handsome ball with a bell inside, and an excellent ball it was!

“Come, Darcy,” said he, “I must have you dance. I hate to see you standing about by yourself in this stupid manner. You had much better dance.”

“I certainly shall not. You know how I detest it, unless I am particularly acquainted with my partner. At such an assembly as this, it would be insupportable. Your sisters are engaged, and there is not another woman in the room, whom it would not be a punishment to me to stand up with.”

“I would not be so fastidious as you are,” cried Mr. Bingley, “for a kingdom! Upon my honour, I never met with so many pleasant girls in my life as I have this evening; and there are several of them you see uncommonly pretty.”

“You are dancing with the only handsome girl in the room,” said Mr. Darcy, looking at [Jane], the eldest Miss Bennet.

“Oh! She is the most beautiful creature I ever beheld! But there is one of her sisters sitting down just behind you, who is very pretty, and I dare say very agreeable. Do let me ask my partner to introduce you.”

“Which do you mean?” and turning round he looked for a moment at Elizabeth, till catching her eye, he withdrew his own and coldly said: “She is tolerable, but not handsome enough to tempt me; and I am in no humour at present to give consequence to young ladies who are slighted by other men. You had better return to your partner and enjoy her smiles, for you are wasting your time with me.” 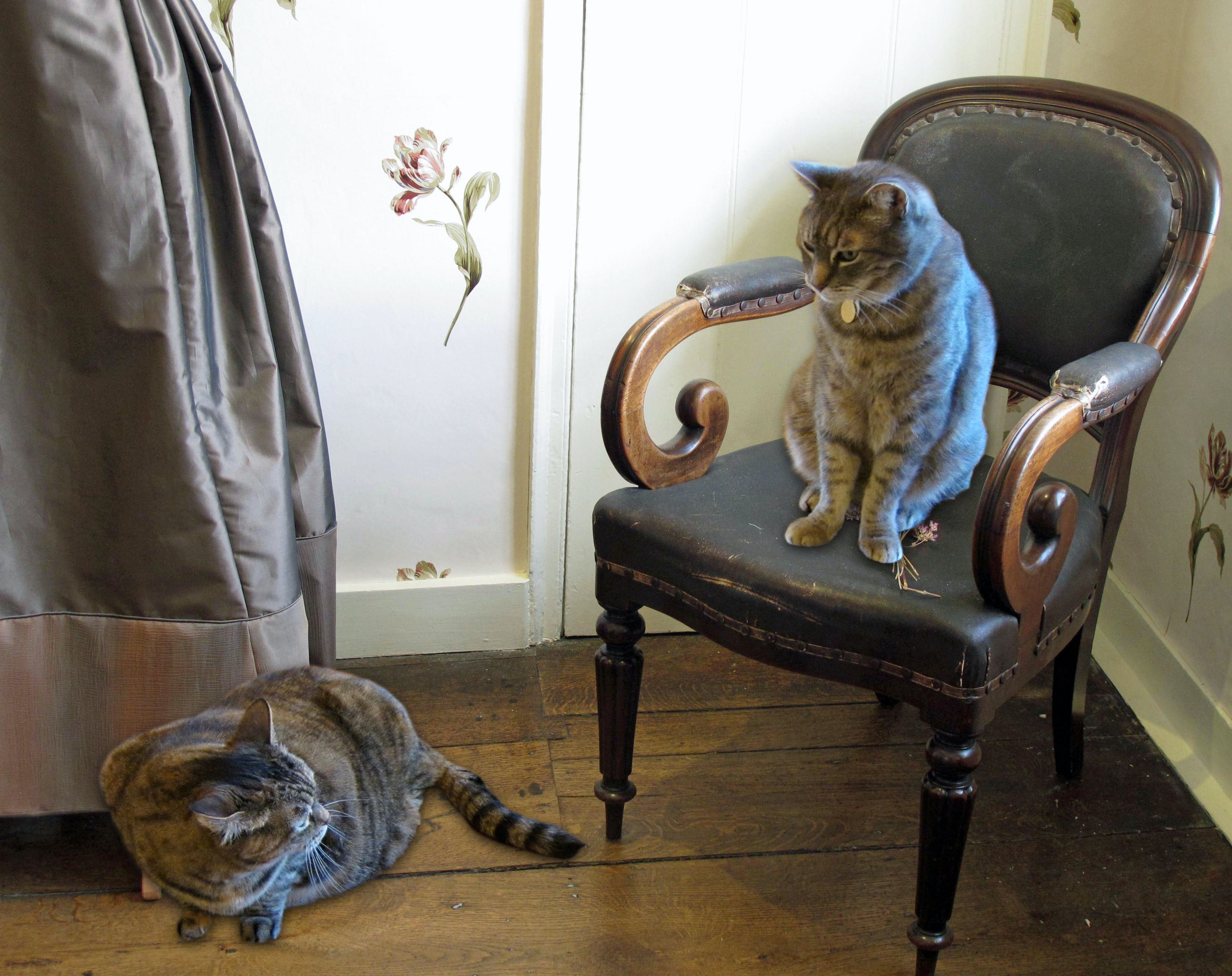 She is tolerable, but not handsome enough to tempt me. 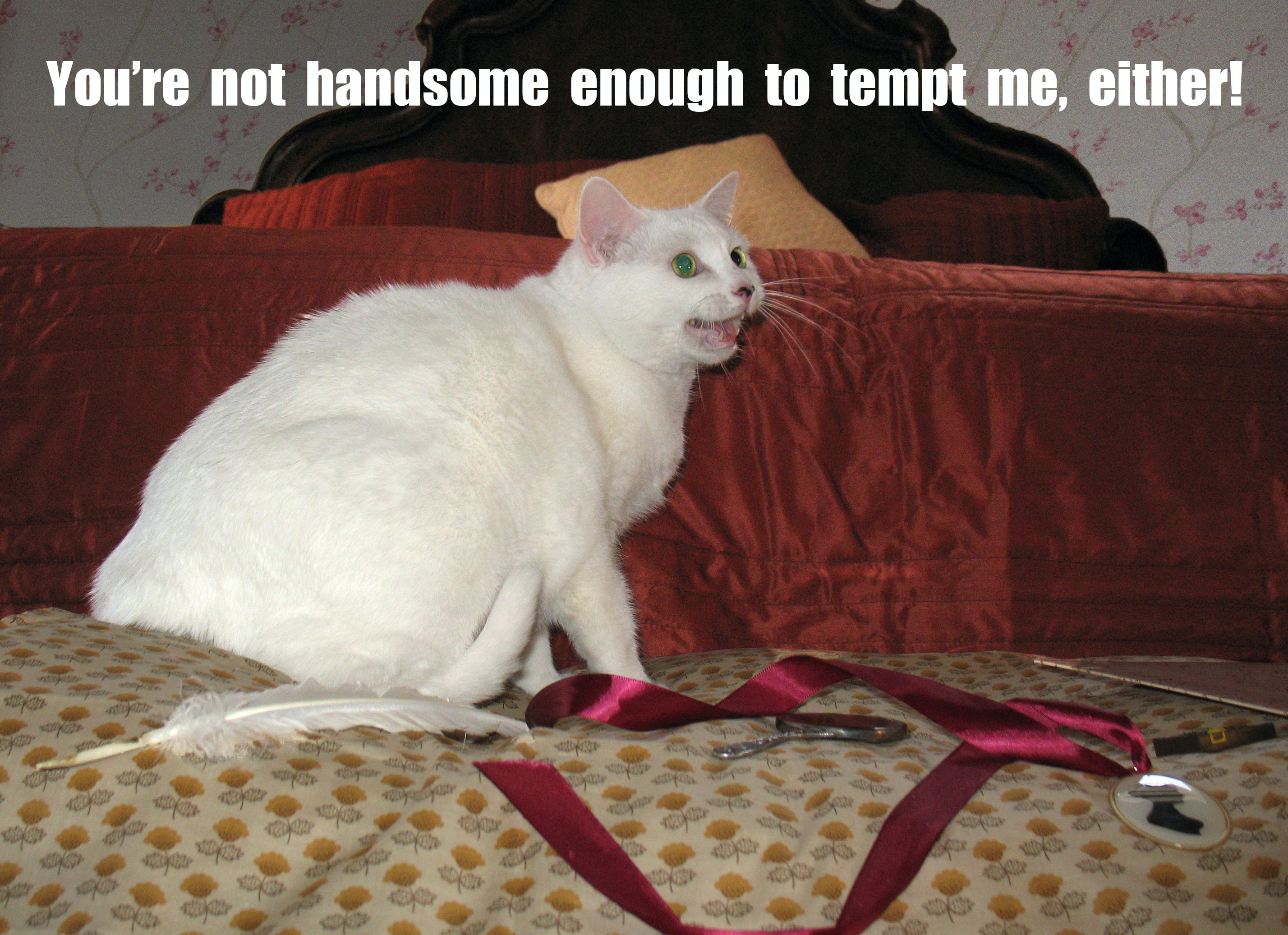 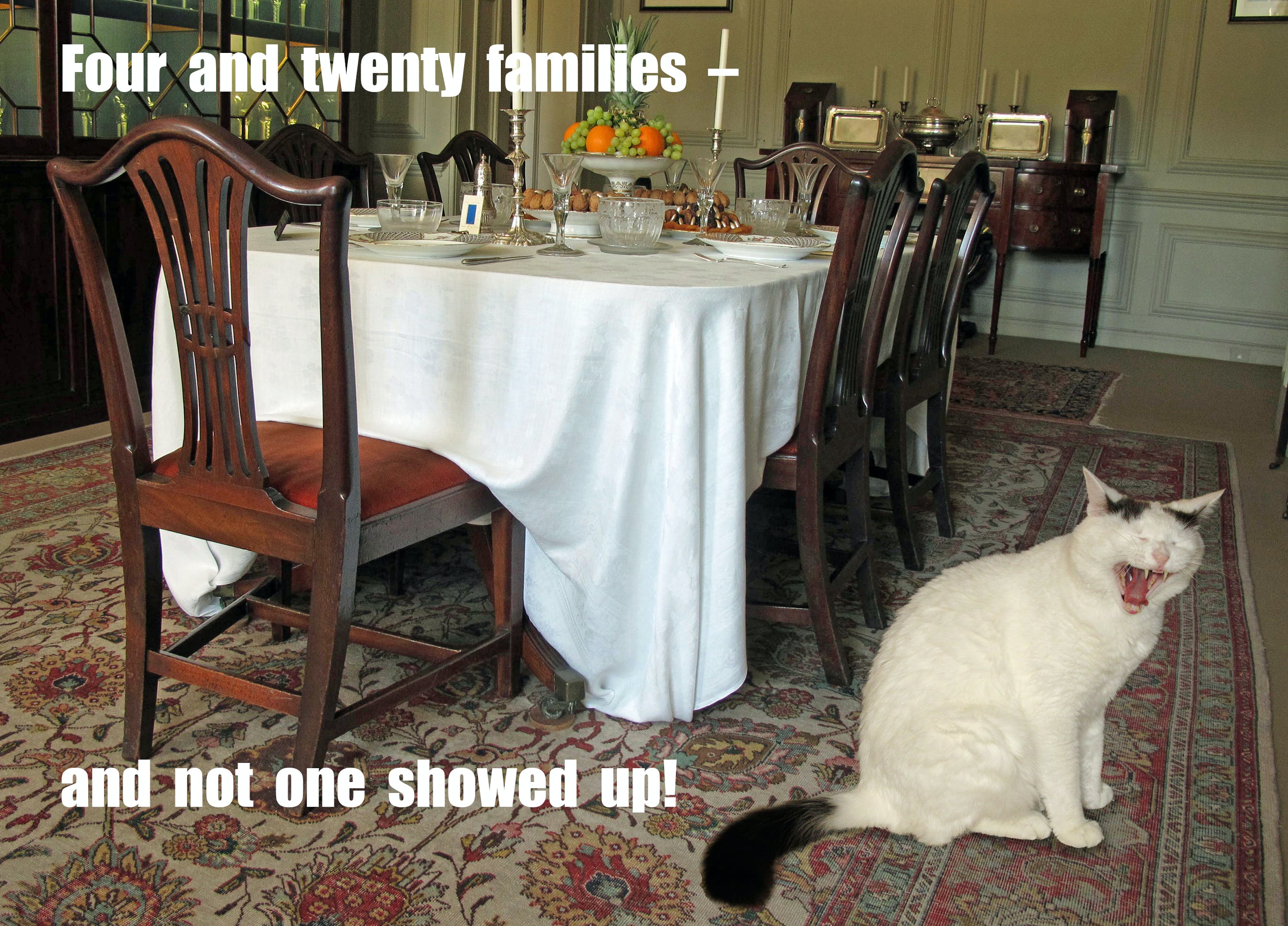 The above selection is an excerpt from Pride and Prejudice and Kitties: A cat lover’s romp through Jane Austen’s classic, by Jane Austen, Pamela Jane and Deborah Guyol (Skyhorse Publishing, 2013). For more Austen and kitties, visit prideandprejudiceandkitties.com.