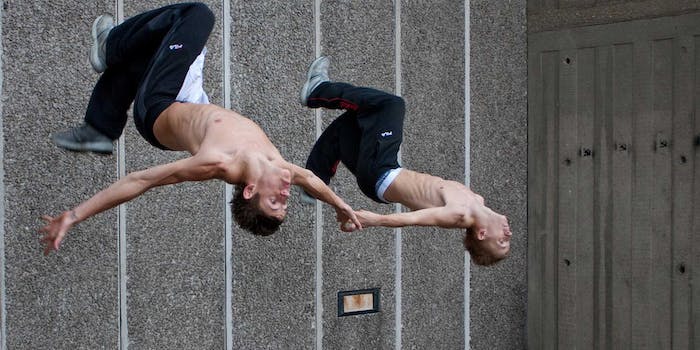 Parkour as a discipline is not for the faint of heart: It requires agility, strength and fearlessness. We learned just last week that even the most highly trained practitioners face grave danger when a Hunger Games stunt double named Carlos Lopez tragically fell to his death while attempting a parkour jump between two buildings in Portugal.

The guys at Corridor Digital understand these risks better than anyone, and that’s why they crafted the perfect parkour hack: a stop-motion video that shows them doing crazy moves while remaining firmly on the ground the entire time. And though a fight does ensue, it doesn’t appear either of the participants were ever in harm’s way.

Children, do try this at home. It will probably help you get a super cool job after college.

Hopefully these guys know they’ll never be as talented as the parkour goats, but we appreciate their effort.